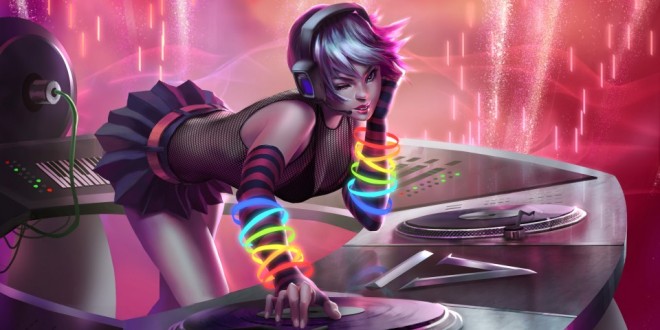 After an official teaser from Riot Games and a few smaller leaks, all of DJ Sona’s splash arts and videos of her abilities were leaked today on a Chinese website, possibly prompting Riot to make an official announcement earlier then intended. DJ Sona is the new ultimate skin, just like Pulsefire Ezreal and Spirit Guard Udyr. Ultimate skins in League of Legends usually have a high amount of detail and this one might even overshadow previously released ultimate skins. Riot defines this tier of skins as “a complete reimagining of a champion that includes an evolved model and additional features and bonuses (e.g., summoner icons). Features: new model that evolves into different forms, new textures, new splash image, new animations, new visual, new voice over and sounds, additional/bonus content.”

DJ Sona will have three forms that you can toggle through by typing “/toggle” or pressing ctrl + 5. Each form creates a unique audio-visual experience that only she and her teammates can hear. The first of her three forms is named Kinetic, it is the default and has an energetic, dynamic vibe to it. The second one is called Concussive, with edgy, hard-hitting rhythms. And last, but not least comes the Ethereal form, which has of course more relaxed, atmospheric tunes. When you go through the forms, the order will always be Kinetic to Concussive to Ethereal, you can’t skip or shuffle them. When you change the tune, Sona changes visually too, getting a new outfit and a new turntable.

This experience evolves dynamically as the game progresses. The way you can tune in to her beats as a teammate, is to bringing up the in-game scoreboard, find the button on the left side of the screen, next to the champions portrait, click it and let Sona play her music for you. Gone are the days when only the summoner could hear her! Though you can’t pick what type of music she performs, if you had enough, you can go back to the default, in game music by clicking the aforementioned button again.

If you have taken a liking to the songs, the tracks can be downloaded at the official site. When the new skin will be made available, you can purchase it in the Riot store at the cost of 3250 RP. Which one is your favorite form? Would you be willing to by the skin, or do you think it’s over priced?

I’m Load The Game’s co-founder and community manager, and whenever I’m not answering questions on social media platforms, I spend my time digging up the latest news and rumors and writing them up. That’s not to say I’m all work and no fun, not at all. If my spare time allows it, I like to engage in some good old fashioned online carnage. If it’s an MMO with swords and lots of PvP, I’m most likely in it. Oh, and if you’re looking to pick a fight in Tekken or Mortal Kombat, I’ll be more than happy to assist! Connect with me by email markjudge (@) loadthegame.com only
@@MarkJudgeLTG
Previous Chivalry Medieval Warfare arrives on PlayStation 3
Next New Star Wars Humble Bundle available