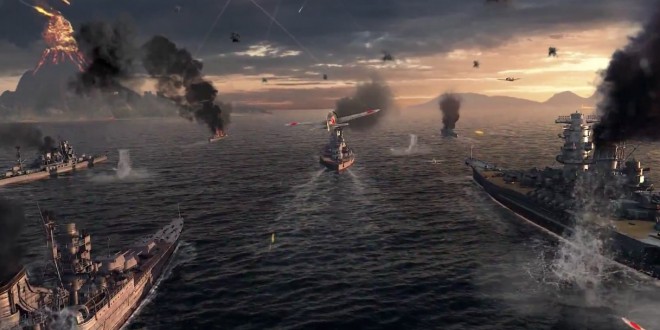 Wargaming is known for creating a series of free-to-play MMO titles that offer players the opportunity to experience combat from the middle of the previous century. The developer’s first title in this franchise was World of Tanks. The title allowed players to experience the complexity of realistic tank battles. There is no such thing as a minor detail in World of Tanks. A shell from a more powerful tank could destroy you in one shot or ricochet harmlessly, depending on the tank’s position and armor slope. A destroyed tank could be an obstacle or a shield in the right hands. Games in this franchise are designed to be easy to learn, but difficult to master.

The latest game in the series is no exception. Wargaming has released the first gameplay trailer (see below) for World of Warships. This trailer showcases some of the weapons and mechanics from the final title. Perhaps the most exciting reveal was the introduction of the ramming mechanics. They will likely only be used in extreme cases, however they will certainly make some naval battles more interesting. Ramming is not a valid tactic in contemporary naval combat. It is only a weapon of last resort. In fact, no military ship has been equipped with a ram for over 100 years.

World of Warships is a free-to-play MMO naval combat title. It will offer players the opportunity to command a ship from one of four classes. Destroyers are the weakest ship class, however they have speed and torpedoes. Ships of this class are able to dodge enemy fire while launching powerful torpedoes at enemy ships. Battleships are powerful and have heavier armor. However that could easily become weakness, if an enemy ship blindsides them. Cruisers are a good balance between power and speed. The final class, Aircraft Carriers, are the most interesting one. They are extremely weak against every other ship class, however they carry fighters to protect friendly ships and bombers to attack enemy ones. Carriers will be every team’s greatest assets and liability. No release date has been announced for World of Warships, however it is expected to enter open beta testing in 2015.

I'm a gamer and a massive fan of anime. I'm a massive simulator geek. Who isn't? Simulators offer me the opportunity to experience something I wouldn't otherwise. Have you ever driven a train? I haven't, and I probably never will. However Train Simulator 2015 gives me the opportunity to experience what it might be like. I'm also a big train and space exploration geek.
@ivanmashkov
Previous Shiftlings Coming To PS4
Next HTC One M7 vs iPhone 5s: metal-clad flagship battle