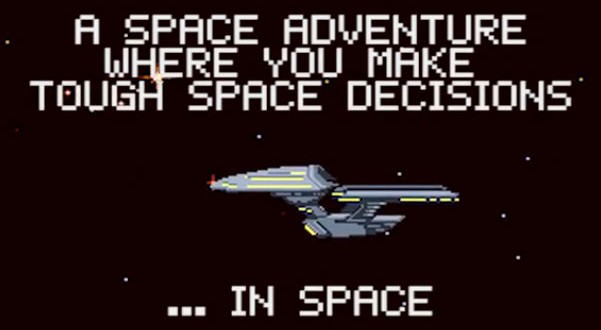 The crowdfunding platform Kickstarter has been a massive boon for video game developers. It allows fans to support games they love and developers to take on projects that are not commercially viable. One of the newer projects on Kickstarter is Orion Trail. Players become the captain of a ship in this resource management simulation that lets players choose their own adventures.

“In the game, you are captain of the Indestructible II, flagship vessel of Galaxy Force. Your mission: to explore and survive the dangerous and enigmatic Orion Trail. With the help of your trusty officers, ship, and crew, your success is ensured.” – an excerpt from the game’s Kickstarter page

Orion Trail asks players to make the tough calls that only starship captains can make. The game’s over 50 random encounters will test players abilities and luck. Captains will have three choices when dealing with encounters, however there is no right choice. The result of every decision is based on the roll of the die. Players will be able to improve their odds a bit. The choice of captain, officers and equipment will decide how well equipped one is to deal with any encounter. There are five ways to resolve an encounter:

Schell Games, the title’s developer, has released a prototype of Orion Trail, however there’s still a great deal of work to be done. This includes creating additional encounters and improving existing ones. Another planned feature is making the encounters more dynamic. Certain encounters will have hidden options that can only be unlocked by having the right captain, officers or equipment.

One of the game’s biggest features will be the Away Missions. Captains will select an officer and a team of redshirts to “beam down to a planet, enemy ship, or other space-thing.” They then embark on a set of mini-encounters. Any mishap during these missions will cost you redshirts. Players will have to decide to risk it or call it quits. The Kickstarter campaign will run until March 13th. Any pledge over $10 will include a copy of the game for PC, Mac and Linux. Orion Trail’s estimated release window is December 2015.

I'm a gamer and a massive fan of anime. I'm a massive simulator geek. Who isn't? Simulators offer me the opportunity to experience something I wouldn't otherwise. Have you ever driven a train? I haven't, and I probably never will. However Train Simulator 2015 gives me the opportunity to experience what it might be like. I'm also a big train and space exploration geek.
@ivanmashkov
Previous Hunting Ground Announced For Secret Ponchos
Next Samsung smart TV is listening in on private conversations