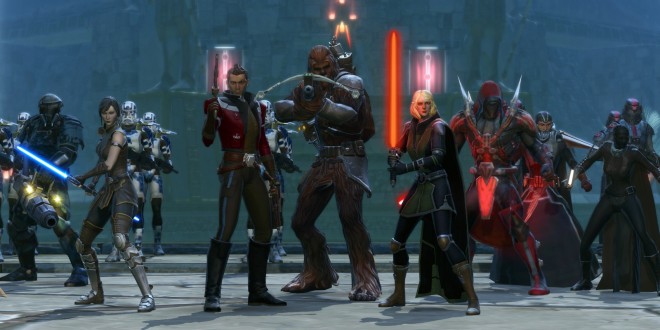 Plans Unveiled for Updates to Star Wars: The Old Republic

A new post from senior producer for Star Wars: The Old Republic Bruce Maclean has laid out the first plans for further updates for the MMORPG from BioWare. The game already saw plenty of improvements last year with two expansions, a reworking of the class system where Disciplines replaced the old Skill Tree function, and continued regular story updates through Flashpoints. However, Maclean points out that most updates have been focused on the part of the game that deals with the systems and social networks of an online multiplayer game. Now, particularly after the success of the Shadow of Revan expansion, the team behind Star Wars: The Old Republic will instead be focusing on enhancing the story.

More character-driven adventures will be brought to the universe with a unified story, bringing together the eight classes, and a bigger role of the player character’s personal history and the choices that the player makes. Maclean is vague on the specifics as apparently these expansions are still in development. His main point, however, is that “what [they] have planned really gets back to the Star Wars™ fantasy at the heart of [their] game.” Two major updates with this in mind will be brought to Star Wars: The Old Republic with one hitting by summer and the other by the end of the year.

Maclean also laid out the development plans in the meantime- while reserving the right to make adjustments to it in the future. In just a few days, February 12, Hard Mode Flashpoints Blood Hunt and Battle for Rishi as well as the start of PvP Season 4 will be brought to Star Wars: The Old Republic. In the spring, an outfit designer feature will become available, a new story arc will begin on the Imperial homeworld of Ziost, and PvP Season 5 will begin. Beyond that, at an unspecified time, a new stronghold will be added and there will officially be a playable Togruta.

Star Wars: The Old Republic was released for Microsoft Windows in 2011 and has seen regular updates from developer BioWare Austin since then. It takes place in a fictional Star Wars universe and centers on the conflict between a newly revived Sith Empire and the Galactic Republic.

Emma is an aspiring something-or-other with a love for video games fostered since childhood. She is more prone to rage-quits than she would like to admit. In her spare time, she runs her own blog and writes creatively.
@back_Paq_ing
Previous New Bladestorm: Nightmare Trailer Revealed
Next Details for Vergil’s Bloody Palace in DmC: Definitive Edition Released