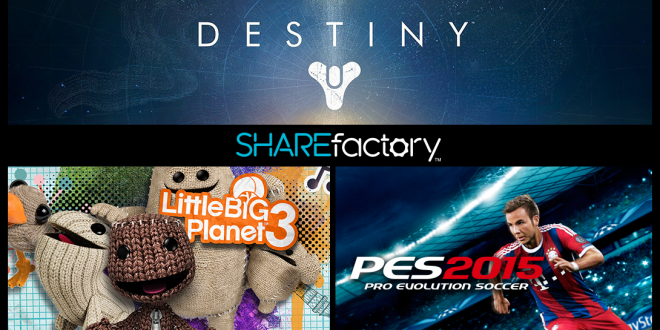 Courtesy of the PlayStation Blog.

One of the most prominent features of the PlayStation 4 is the sharing function. This feature allows users to share screenshots and gameplay videos to social networks for the community to enjoy. Sony released an app, SHAREfactory, for the PlayStation 4 early last year. This app allows users to edit the videos they recorded. This resulted in some amazing content appearing on social media. Now SHAREfactory has been updated. This update includes new themes, an improved UI and new stickers. The new themes have been added to the PS Store and include:

More themes will be made available to users on the PlayStation Store over time. The app will include an improved User Interface (UI). SHAREfactory will include a new section, My Gallery. It will allow users to view and share completed projects. Users will be able to upload their videos to YouTube and Facebook with the push of a button. The update will also include new personalization options, namely stickers based on profile pictures and avatars.

The PlayStation 4 was released late 2013. It has become the fastest-selling console in the history of the video game industry. This has been attributed to Sony’s renewed focus on delivering amazing titles. The company has been working with indie developers to bring unique and innovative titles to the console. This allows users to experience unique titles and fill the days between major releases.

This console generation has also been characterized by the rise of the subscription business model. Sony has recently introduced a subscription as part of their PlayStation Now service. It allows users to pay a monthly fee to access a large catalogue of PS3 titles. The library doesn’t contain many particularly memorable titles, however that may change over time. The company has recently added five new games to the list of titles available as part of this subscription. This service and PS Plus may become the cornerstones of the PlayStation brand for years to come. Only time will tell.

I'm a gamer and a massive fan of anime. I'm a massive simulator geek. Who isn't? Simulators offer me the opportunity to experience something I wouldn't otherwise. Have you ever driven a train? I haven't, and I probably never will. However Train Simulator 2015 gives me the opportunity to experience what it might be like. I'm also a big train and space exploration geek.
@ivanmashkov
Previous First Speedrun of The Witness Takes Six Hours
Next ‘Leaked’ MKX Achievements Revealed as Fake