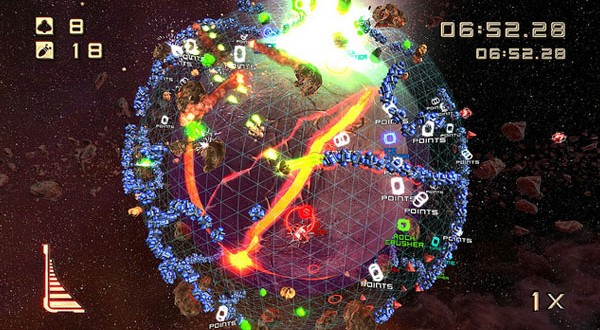 Super Stardust Ultra will be released on PlayStation 4 next week as announced by Sony Computer Entertainment. The game, the fourth in Housemarque’s series of twin stick shooters was originally made for the PlayStation 3, but the new port will be available for download from the PlayStation Network on February 10 in North America and February 11 in Europe. The game will be priced $12.99/€12.99 respectively.

One such mode is called Blockade. Players are challenged with avoiding a continuous stream of mines dropped from the back of your Star fighter. The mines also destroy anything else on the planet that make contact with them, so these dropped explosives can also be used to your advantage. Therefore, timing is the most essential skill in this new mode.

An optional Interactive Screening mode is also available in Super Stardust Ultra. Players have the choice of whether or not they want to stream their game online. Viewers will apparently be able to decide what happens next whether by sending  some more obstacles and challenges your way or a more friendly care package to help you out.

Super Stardust Ultra is a shoot-em-up game has the player piloting a fighter in the middle of space. The mission is defend the planet from enemy attacks while also struggling to stay alive in the midst of a meteor storm.

A new trailer for the port of Super Stardust Ultra has also been released. Check out the video below.

Emma is an aspiring something-or-other with a love for video games fostered since childhood. She is more prone to rage-quits than she would like to admit. In her spare time, she runs her own blog and writes creatively.
@back_Paq_ing
Previous New Action RPG Victor Vran Announced
Next New Bladestorm: Nightmare Trailer Revealed