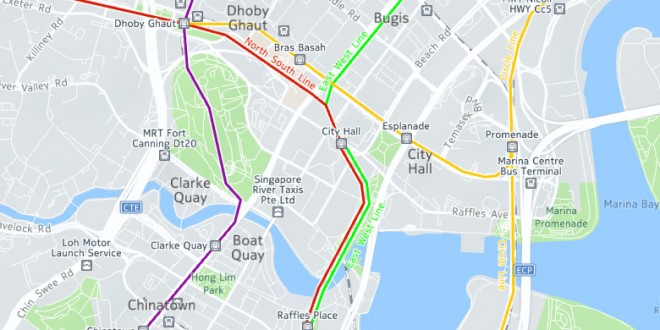 Here Maps is one of the best navigation applications that can easily rival with Google Maps and it just received a worldwide update today. The new Here Maps update brings more roads and buildings into your app, no matter where you live. You will start receiving new notifications telling you about new maps that are available for Here Maps, and while Ian Delaney from Here maps doesn’t detail all the areas that will be upgraded, he does mention that they are too numerous to be listed, so we’re expecting a lot of new maps to be available.

You can now browse complete maps with navigation included of Zimbabwe, Mayotte and Cyprus, which is a new addition to Here Maps. Other areas in Comoros, Djibouti, Eritrea, Fiji, Gambie, Liberia, Sierra Leone, Somalia and Madagascar are also part of the new apps you can download starting today. At the same time, the update brings “water features” to Here Maps, including ponds, rivers and lakes.

Developers have also been focusing on public transport and have improved the way in which Here Maps users can access train lines, subway routes as well as tram lines across the world. New areas in Singapore, Rio de Janeiro and Sao Paul have been added, among others. The update to Here Maps is starting its rollout today for both Android and Windows Phone devices across the world, so you should be getting a notification about it soon enough. Sit tight, though, as the update is rolling out in batches, so you might have to wait a couple of days depending on region. You can always check for updates, too, to see if Here Maps is ready to be refreshed.

Here Maps is shaping up to be a solid competitor to Google Maps, not to mention Apple Maps. With the new rumors about Apple updating their Maps app with Street View and improving their 3D mapping technology, it was only natural that others follow in improving their navigation offerings. Here Maps is still fairly new, yet it has quickly become one of the most popular applications in app stores. Let us know what new areas you find in Here Maps once you’ve updated!

My life-long dream has been to test out every gadget on the market! Considering the fact that I've rapidly destroyed almost every gadget I've had so far, I'm not inclined to owning something, so my ideal outcome would be to have a different gadget each month. I'm really into smartphones, wearables and tablets and I love Playstation and Xbox, I'm sure I'll beat you at your own game (after a month of training... or two)
Previous HTC smart watch for Android and iOS, running on own OS
Next Moto G Android 5.1 Lollipop spotted in the wild