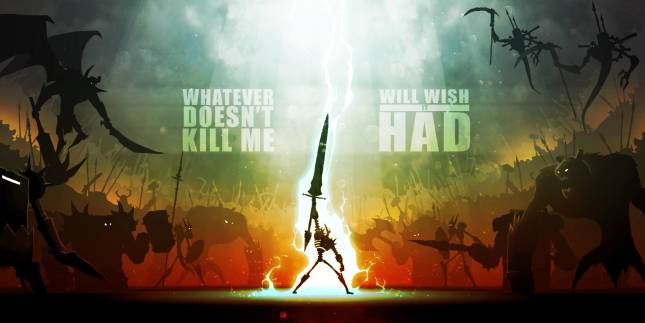 Strength of the Sword Ultimate on Kickstarter

A new Kickstarter campaign has been announced for Strength of the Sword Ultimate. This campaign intends to bring Ivent Games’ first project, Strength of the Sword 3, to Windows, Mac and Linux operating systems. This two-person studio won’t just be bringing the game over, they’ll be improving upon it. This new edition of Strength of the Sword 3 will include three new modes, namely co-op, player vs. player (PVP) and the Dark mode. The co-op mode will allow two players to battle against AI opponents that will have more tricks up their proverbial sleeves. The PVP mode will feature a tug-of-war style deathmatch. Players will start on a battlefield between two towns. The first player to take over the enemy’s castle will be named the victor.

“I will play bowling dressed like a pixie dress, wings, tiara – the whole deal. God help me if this actually happens.” – an excerpt from the game’s Kickstarter page

The only game in the Strength of the Sword series was released on the PlayStation 3 console in 2013. This title combines the tactical and skill-based combat of a 3D fighting game with large numbers of enemies and boss battles from a brawler. Strength of the Sword 3 includes story and survival modes. The story mode asks players to defend the realm against a rising evil that has swept the land. This happens over four worlds and 11 stages. The survival mode challenges players to kill enemies against the clock. 40 waves of enemies will leave only the best standing. The community has been able to reach the 36th wave. In fact, the developers aren’t sure that “the next 4 waves even work.”

I'm a gamer and a massive fan of anime. I'm a massive simulator geek. Who isn't? Simulators offer me the opportunity to experience something I wouldn't otherwise. Have you ever driven a train? I haven't, and I probably never will. However Train Simulator 2015 gives me the opportunity to experience what it might be like. I'm also a big train and space exploration geek.
@ivanmashkov
Previous Dying Light Dev Reveals Special Be The Zombie Video
Next Tim Cook says the Apple Watch will change your life – rant included