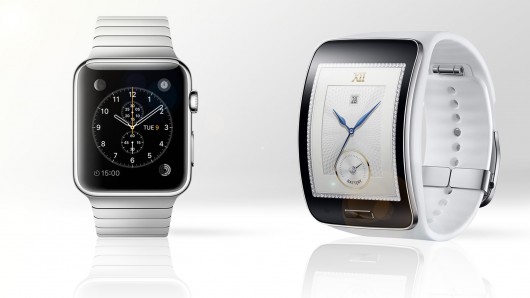 Can the Apple Watch take on the Gear S?

The Apple Watch is being prepped for a massive launch in April this Spring, and Tim Cook is more than excited about the new wearable device from the company. According to Tim, the Apple Watch will revolutionize the wearable market. The timepiece will be marketed as both a gadget and jewelry, as Apple Stores are already outfitting stores with safes and specialized equipment for handling and weighing precious materials. That makes us wonder if the Apple Watch will be able to compete with affordable (sort of) wearable gadgets like the Moto 360 and Samsung Gear S. Because if it’s more jewelry than feature, we don’t think the Apple Watch will be the big break the wearable industry needs.

We decided to compare what we know about the Apple Watch to the newly launched Samsung Gear S, one of the most feature-packed smart watches on the market right now. Seeing as the Gear S is the ideal wearable, as it doesn’t need a smartphone in order to function properly, having its own 3G and GPS built-in, the Apple Watch should be at least this function- and feature-filled in order to make a difference on the smart watch market. Maybe as an expensive (and imho ugly) jewelry item it will be successful, but that doesn’t mean it revolutionizes the wearable industry. That being said, let’s see what the Samsung Gear S has to offer and how the Apple Watch is shaping up to compete against that. 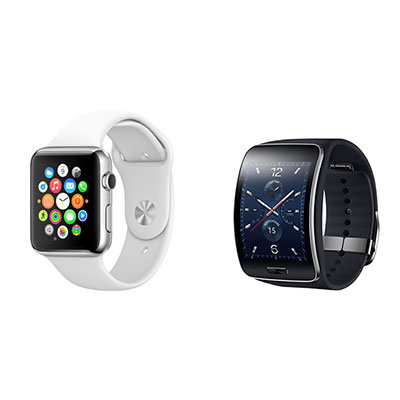 We chose the Samsung Gear S because it’s the most similar to the Apple Watch when it comes to design. Naturally, the Apple Watch comes in more sizes and variants, including various gold watches, but that doesn’t mean design is all there is to a smart watch. On the contrary. The smart watch aims to provide technology in an easier to use and access medium compared to a smartphone. Apple is not fit to compete in the luxury watch market, and it’s not a company that specializes in watches. Launching a super-expensive product that aims to be a hybrid between high-class watch and feature-packed gadget is prone to flop. First off, how many people actually see the purpose of wearable devices? Granted, the wearable market hasn’t developed to a point where having a smart watch can replace other gadgets in your home altogether, but we’re getting there, and the Gear S is proof of that. Secondly, the luxury versions of the Apple Watch are said to cost as much as $5000. How many of you would pay that much for a wearable device that cannot handle a day’s use (as per Tim Cook), have a display you can barely see, but have a lot of gold in their build?

Regardless of how many would buy the Apple Watch, because I’m sure analysts saying Apple will sell 26 million Apple Watch units aren’t getting their information from thin air. There always is a market for Apple products, but I think analysts overestimate a lot. If you’re wondering why I’m so subjective, it’s because Tim Cook is arrogant about the Apple Watch, and arrogance never helps when you’re starting a new business, because that’s what Apple is trying to do with the Apple Watch: kick-start the wearable business. That’s not a bad idea and it would be awesome if Apple managed to do something with the timepiece that has never been done before.

The downside of teasing the Apple Watch was that we already know what it’s going to pack in terms of hardware and features, and unless Apple surprises us with something, the timepiece is shaping up to be just the same as all the other wearable devices out there: generic, irreparably tied to a smartphone. The whole purpose of a wearable device would be to make the use of other devices obsolete when you’re not in the comfort of your home. But the Apple Watch won’t be doing that! It will still need an iPhone! So where could the innovation be, then?

The Samsung Gear S is one of the best and most expensive smart watches on the market right now, and with good reason. The Gear S will set you back $300 without a contract. If adding that “contract” bit to the description confuses you, you should know that AT&T sells the Gear S with a two-year data plan for $200, That’s because you get a data connection on the smart watch so you don’t need to use a smartphone with it. With the Gear S, you can make and take calls, send and receive messages and use the internet without a smartphone nearby. Isn’t that the purpose of a wearable? 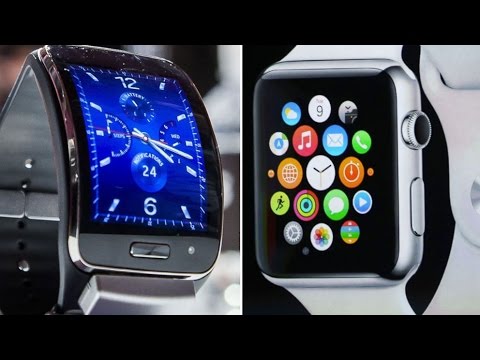 The Samsung Gear S comes with an IP67 certified, water and dust resistant chassis. With that, you can be positive that showering with the watch on your wrist won’t be a problem. The Apple Watch, as far as we know, does not have IP certification, which means no showering, no heavy rain, no accidental drops into the toilet, or your jewelry will become just that: jewelry. If the Apple Watch is launched with no IP certification whatsoever, just a water resistance rating for instance, the timepiece will lose a lot of customers, as many have expressed in Apple support forums that if the Apple Watch isn’t waterproof, it presents no interest to them.

Design-wise, the Samsung Gear S isn’t special, but it does come with a neat curved display. In the design area, the Apple Watch will dominate, because it will be available in two different sizes, with six different watch builds, including metal, rose gold, gold, silver and so on. You will also get a choice between a dozen watchbands, but that’s a pretty big letdown, because you can only buy the bands from Apple, as far as we know. Other watches will be compatible with any 20 or 22 mm bands that you find on the market, but the Gear S and Apple Watch are not.

The curved display on the Gear S measures 2 inches, and the Super AMOLED touchscreen comes with a resolution of 360*480, which adds up to 300 ppi pixel density. That’s not anything to write home about, but it is a decent display that responds well to touch. It has Corning Gorilla Glass 3 protection on top, so that you don’t end up banging the screen up too bad. In the display department, the Apple Watch takes the lead with a sapphire crystal glass screen, which is more resistant to scratches than Corning’s offering. The Apple Watch display is smaller, the bigger model having about a 1.53 inch display, while the smaller model comes in at approximately 1.33 inches.

We don’t have any official information about resolution, but Tim cook said Retina display, so we’re expecting a ppi density of around 350 ppi and whatever resolution that would amount to. The display on the Apple Watch is pressure sensitive, allowing for gestures like force-touch, which would make interaction with the device a bit easier and more versatile, so in the display department, the Apple Watch might be the winner. We’ll find out exact measurements and technical specs when the watch is launched in April.

Since we don’t have a lot of information about the internals of the Apple Watch, we prefer not to judge performance yet. We do know that the battery won’t last more than a day, but that is valid for the Gear S, too, especially when using the available data connection. Battery lives in wearables need to be vastly improved in order for the industry to kick off properly, so both watches fail in the battery life department right now. But failing is valid of most smart-er watches out there nowadays.

The Apple Watch comes with the added input button called the Crown, and a power button, so that you can pan, zoom and scroll with the crown, which is a good idea. The Gear S only has the one physical button on the front which serves as a home/power button. At the same time, you get an NFC chip in the Apple Watch, which will most likely be locked to Apple Pay for the time being, but if Apple unlocks the chip, you could do wonders with the watch. Both the Gear S and Apple Watch have built-in heart rate sensors, so tracking that won’t be a problem on either one. The Gear S on the other hand, has its own GPS, which means you can freely navigate with it without having a smartphone paired, which is impossible with the Apple Watch as far as we know.

As you can see, aside from software features which we can’t comment upon until we test, the Apple Watch isn’t more than any other wearable on the market. But that might change until April, so we’re not passing judgement just yet. This comparison is based on what has been confirmed by Apple so far, and since the company has been pretty mum about technical specs and features in the Apple Watch, we can’t accurately predict the end result. Nonetheless, if the Apple Watch isn’t waterproof and won’t work without a paired smartphone, it won’t do much revolutionizing. Tizen isn’t exactly amazing on the Gear S, either, but at least you can go places with just the watch and no smartphone without being afraid of it being stolen or damaged by water. What do you think about the Apple Watch? Do you believe it will revolutionize as much as Tim Cook wants it to, or will it be just another attempt at a smartphone accessory? Feel free to leave your opinions in the comments below. Excuse the subjective tone of voice in this comparison, but I’m not fond of the Apple Watch yet.

My life-long dream has been to test out every gadget on the market! Considering the fact that I've rapidly destroyed almost every gadget I've had so far, I'm not inclined to owning something, so my ideal outcome would be to have a different gadget each month. I'm really into smartphones, wearables and tablets and I love Playstation and Xbox, I'm sure I'll beat you at your own game (after a month of training... or two)
Previous OnePlus and Paranoid Android team up for Oxygen OS
Next XSEED Gives Story of Seasons an Official Release Date