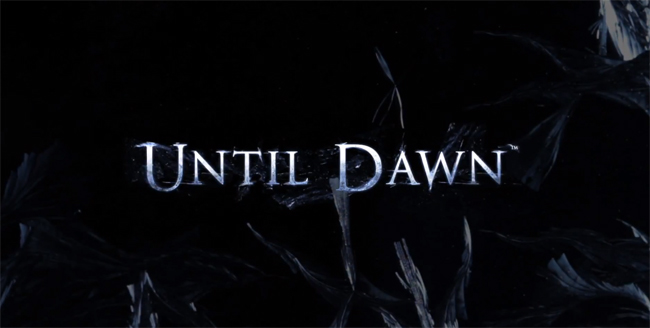 Valentine’s Day is tomorrow and as shopkeepers hurry to put out heart shaped balloons and fill shelves with boxes of chocolate and romantic cards, couples around the world are planning their weekend away from the city. Many will retreat to the mountains to spend some time with their significant others while skying and cuddling by the fire. The guys at Supermassive Games decided to celebrate the day in a special way by releasing a new love-themed trailer for Until Dawn, their upcoming survival-horror game, available on Sony PlayStation’s YouTube page. The trailer, titled “Roses are (blood) Red” showcases some of the gameplay as Billie Holiday’s “Stormy Weather” plays in the background.

In Until Dawn, a group of eight teenagers decides to celebrate the death of one of their friends by spending a night in a cabin on the mountains. Unaware of being watched and stalked by a serial-killer, as the night progresses the kids realize that something isn’t quite right. Before the night turns into an all-out fight for survival, players will have time to get to know the eight characters and the relationships between them. As things go south and what started as a fun trip to the mountains transforms into a nightmare, while the eight friends look for a way to survive, choice becomes an important part of the narrative in Until Dawn.

As a result of player’s choices, relationships between the characters can either improve or crumble. Being mean to somebody could result in them not willing to help a specific character later while developing a strong friendship or a romantic relationship between two character can result in special options and the ability to make specific choices while those two are interacting with each other. The game poses no limit to the way a relationship between the characters will evolve and how gameplay is affected by it. The Narrative in Until Dawn adapts to players’ choices and will always go forward, meaning each playthrough will be different from the previous one.

Until Dawn was scheduled for release on Playstation 3 but it was decided, in august 2014, to make it a PlayStation 4 exclusive. The game is developed by Supermassive Games using an updated version of the Killzone Shadow Fall engine and is published by Sony. The voice-over cast includes few Hollywood celebrities such as Hayden Panettiere, Rami Malek and Disney Channel actress Meaghan Martin. Until Dawn is scheduled for release during summer 2015.

Alessandro is a languages and literature student and gaming enthusiast. Long hair and a bushy beard, he spends most of his time on romantic dates with fascinating old tomes. In his free time, he follows and comments the gaming community while playing games. You can follow him on twitter to see what he's up to.
Previous Just Cause 3’s First Trailer Confirms Winter Release
Next Dying Light is January’s Best-selling Game in the US