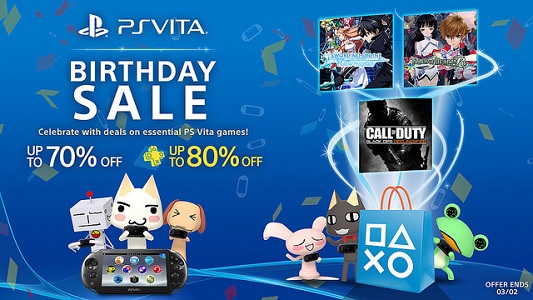 Sony has previously announced an anniversary sale to commemorate the third birthday of the PS Vita. It is currently ongoing and will run until the March 2nd. The PS Vita Birthday sale offers deep discounts on over 30 handheld titles. This celebration of the handheld console also features some content that has been made available free of charge. This includes a Toro and Friends PS Vita theme, a gold coin pack in Fat Princess: Piece of Cake and a spirit in Destiny of Spirits. This sale features some amazing titles for the PS Vita, including Limbo, Metrico and Hatsune Miku: Project DIVA F 2nd. The full list of games on sale is available here.

The PS Vita is Sony’s third attempt at creating a handheld video game console. It was released in the US in February 2012 as the successor to the popular PlayStation Portable (PSP) console. It was a significant improvement over its predecessor, however it also had many flaws. One of the console’s most well-known feature is the need for proprietary memory cards. This became its biggest criticism. The memory cars were sold at extremely high prices compared to regular memory cards. There have been several price drops, however the company was unable to allay all criticism regarding the memory cards. The console’s lack of major titles has also been mentioned as a factor that contributes to its underwhelming sales. The console manufacturer has attempted to remedy this situation by supporting indie developers and introducing the remote play feature. This new feature allows owners of the handheld to stream games from the PlayStation 4 console. The introduction of remote play caused an uptick in sales, however the handheld remains a niche console, especially when compared to its predecessor.

Sony’s recent introduction of the PlayStation TV microconsole is the latest attempt by the company to promote the PS Vita. It was originally introduced as the PS Vita TV in the Japanese market in 2013. This microconsole allows players to experience many of their favorite PS Vita titles on their TVs, however it does not support most Vita titles natively. Developers have to update their games to work on the microconsole. Sony’s focus appears to have shifted toward the PS4 console and Project Morpheus virtual reality headset, however the company has not abandoned the handheld at this point.

I'm a gamer and a massive fan of anime. I'm a massive simulator geek. Who isn't? Simulators offer me the opportunity to experience something I wouldn't otherwise. Have you ever driven a train? I haven't, and I probably never will. However Train Simulator 2015 gives me the opportunity to experience what it might be like. I'm also a big train and space exploration geek.
@ivanmashkov
Previous Life is Strange Episode 2 is Not Delayed, Will Release in March
Next Oddworld: New ‘n’ Tasty Patch 1.01 Released for PC!