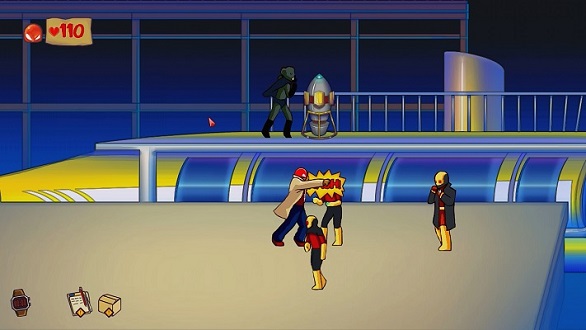 Pyrodactyl Games Has Announced Will Fight for Food

Pyrodactyl Games have announced their latest title Will Fight for Food: Super Actual Sellout: Game of the Hour. The developer doesn’t take anything too seriously in this title, and it shows. Everything from the game’s name to its release date is a joke or a parody.

Will Fight for Food: Super Actual Sellout: Game of the Hour is an RPG Brawler that features brutal violence and a ridiculously complicated conversation system. This unique title will put players in the shoes of Jared Casey Dent, a disgraced wrestler, that has lost his own tournament. Players will be able to explore and fight in a down-and-out small town in Middle America. Jared is awkward and can’t deal with other people easily. Players will find it challenging to work their way through any conversation, however it can be fun to fail.

This game will allow players to fight their way out of any situation, even those that don’t warrant violence. This title’s fast-paced brawling will allow players to deal with a variety of enemies, including the mob, nerds in power armor, the police and a TV superhero. Will Fight for Food is set in 1986 and will allow players to experience one wild night or fight a whole town. The game will feature a wide array of stereotypical characters from 1986, including “the most hilarious, tear-jerking, hamfistedly pandering depiction of Nerds™ in any art form EVER.” Will Fight for Food: Super Actual Sellout: Game of the Hour will be arriving on Steam “sometime in 2015, IDK.”

This isn’t the first game by Pyrodactyl Games. Their previous title, Unrest, was released in July 2014. This title is an adventure RPG set in a fantasy interpretation of ancient India. It challenges players to experience life as ordinary people seeking safety, freedom and peace. Players are able to experience this ancient world as “a peasant girl faced with an arranged marriage, a priest troubled by his radical temple, a slum dweller with a dangerous past, an ambassador from a militant nation, and a mercenary captain far out of his depth.” Unrest offers players an organic dialogue experience and “unparalleled level of control” over any conversation. Unrest is available on Steam right now.

I'm a gamer and a massive fan of anime. I'm a massive simulator geek. Who isn't? Simulators offer me the opportunity to experience something I wouldn't otherwise. Have you ever driven a train? I haven't, and I probably never will. However Train Simulator 2015 gives me the opportunity to experience what it might be like. I'm also a big train and space exploration geek.
@ivanmashkov
Previous Unreal Engine 4 Is Now Free to Use
Next Sony’s SmartEyeglass is not meant for entertainment, or consumers