Breaking News
Home » Tech » Sony’s SmartEyeglass is not meant for entertainment, or consumers 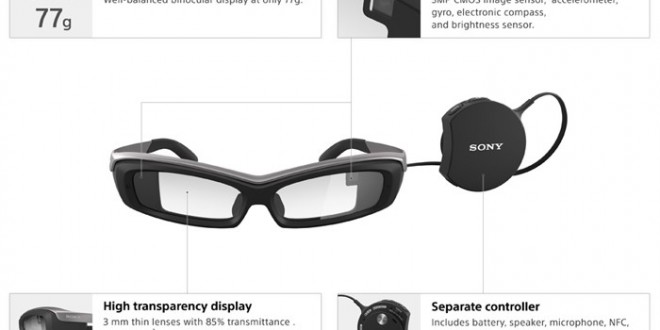 Sony decided that the Smarteyeglass is not for entertainment

Sony’s SmartEyeglass is not meant for entertainment, or consumers

Sony’s new wearable, the Smarteyeglass, is one of the best augmented reality-oriented devices that we’ve seen on the market in the past few years. Google Glass Explorer has had a big impact on how we perceive smart glasses, but Sony’s Smarteyeglass take AR to the next level. The augmented reality glasses are even less stylish than Google’s own offering, but the company doesn’t care about that as the wearable, turn out, is not designed for the average consumer. Finally, a company has finally recognized that the wearable is not yet at a level in which the consumer can make effective use of it, aside from using it as jewelry or to boast with. Google Glass was aimed at the consumer, but the people, instead of rejoicing in such a technology that enhances the way in which we interact with the internet and the world around us, turned towards paranoia and stigma. That is why Google Glass failed to become a crowd-favorite in its Explorer edition. After their initial attempt failed, Google quickly reiterated that the Mountain View giant is still working on Glass and that it will be shifting its focus.

Sony’s Mobile Communications Inc. president Hiroki Totoki made it clear in a Wall Street Journal interview that the Smarteyeglass is not for the consumer. The company envisions the new wearable as a platform that is marketed between businesses and it is targeted at workers and employees. Augmented reality truly has benefit in the workplace, especially in industrial environments. With Smarteyeglass, employees can easily get instructions and guides without them having to use their hands in order to access those. The true benefit of wearable devices is that they are completely hands-free, and leave the users’ limbs free to concentrate on the things they are currently doing, for example, manufacturing a high-energy generator.

Hiroki emphasized the need for high-end wearables like the Smarteyeglass in the workplace and has defined the way in which Sony will be approaching the industry this year. Even though the Sony Smarteyeglass is still in development, the SDK has been released to developers so that people can create applications for the new wearable. We’re very curious to see what kind of apps will surface on the Smarteyeglass later this year, but we’re sure to see quite a few niche-oriented ones. The heavy manufacturing industry could greatly benefit from incorporating Smarteyeglass or any other augmented reality wearable device, for that matter. These devices could help the end user and the customer, as well. Even though consumers want augmented reality, the truth is that first, we have to make practical use of these devices, before making them sources of entertainment. I get that it’s fun to play with virtual and augmented reality, but why not focus developers’ and makers’ efforts into creating something that can benefit the society as a whole ahead of benefiting the consumer as an individual? You can always use the Gear VR to play games or just use the hundreds of devices that are made specifically for that. If we get egocentric with technology, especially augmented reality like the Sony Smarteyeglass, we’re not going to make progress.

My life-long dream has been to test out every gadget on the market! Considering the fact that I've rapidly destroyed almost every gadget I've had so far, I'm not inclined to owning something, so my ideal outcome would be to have a different gadget each month. I'm really into smartphones, wearables and tablets and I love Playstation and Xbox, I'm sure I'll beat you at your own game (after a month of training... or two)
Previous Pyrodactyl Games Has Announced Will Fight for Food
Next Xiaomi launches new smart home products and action camera at MWC 2015