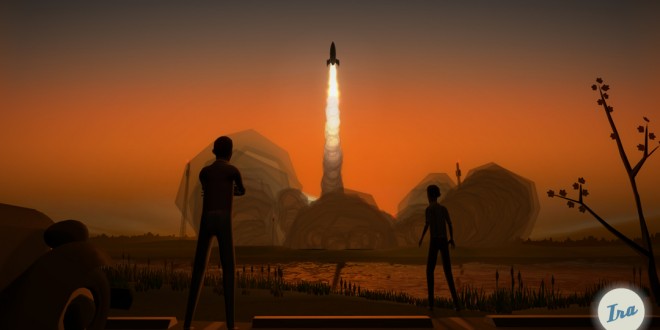 While browsing through my Greenlight queue today, I noticed a game called Ira. It is described as a “surreal point-and-click adventure through a mysterious solar system” by the developers, and I thought that sounded interesting. As I watched the trailer, and read the Greenlight page that Ore Creative wrote for their game, I was immediately wondering what sort of twists and turns we can expect from a game such as this. You play as Ira, who has always had a fascination with the solar system and has desired more than anything to explore it since he was a child. The game takes place on Earth, but on an alternate timeline where we focused heavily on our space program with the goal of space exploration and discovery. As is true in the real world, there are some, however, who do not have access to this technology and are still stuck with rudimentary 20th century technology. Ten years after Earth’s first mission to Mars, Ira is chosen to accompany them on their second journey. Ira awakens on the ship, clueless of his place in time, and finds himself alone, the only crew member to make it out of stasis. That brief summary of the story leaves me supremely interested in finding out more, not only about Ira, but about the world they live in. It leaves me with questions such as why all of his crew members never made it out of stasis? The intriguing story is the main reason that I recommend taking a look at Ira on Greenlight if you get the opportunity to do so.

On top of the interesting story that they have managed to create, which is enough in itself to distinguish them from other Greenlight titles, Ore Creative has also created a beautiful, unique aesthetic for the game. The visuals, at first, seemed very poor to me until I actually got my hands on the game. Once I was able to move around in the environment and look closely at the characters, I noticed that the deliberate art style that they chose really brought the game to life. The almost cartoon-like look of everything does well to offset the more serious story that the game seems to have. It is by no means a realistic art style, but the way they have modeled and colored everything makes for some truly beautiful moments, even in the short demo provided on their site.

Ira is a beautiful, unique game with an interesting story to tell. If you are even the least bit of a fan of storytelling in games then I would highly recommend taking some time to look at Ira on Greenlight and consider giving them a vote if you like what you see. Hopefully, Ira will make it through Greenlight and get onto Steam, where we can explore its beautiful world and experience the mysterious story that Ore Creative are trying to tell.

Edit: Ore Creative has contacted me notifying me that Ira does not in fact, travel to Mars, but that his father mines on mars and Ira joins an expedition to a newly discovered solar system that is light years away from Earth. They plan to change the writing to clarify this point in the near future.

I enjoy playing pretty much any type of game out there. My passion lies in finding the gems of the indie gaming world. When I'm not playing games, I'm programming them, at the gym, or tending to my small army of cats. Writing has always been a part of my life and I'm grateful for the opportunity to get my content out there for people to see.
@spf0227
Previous Wormhole City Kickstarter Campaign Announced
Next Android 4.4.4 KitKat bugs and how to fix them