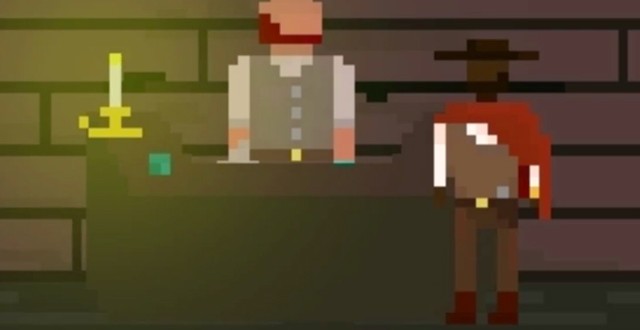 After combing through over a hundred titles over the past few days, I have found one that definitely piques my interest. Luckslinger, a 2-D action platformer by Duckbridge. This Greenlight gem initially caught my interest when I read about their luck mechanic. This mechanic tasks you with collecting little orbs that add to your luck value. Simply put, the higher the luck value, the higher your chance of having something lucky happen. On the other hand, if you have a low luck value, you will have unlucky things happen to you. Examples of this that I ran into in the demo would be a windmill falling on your head, or a water tower collapsing suddenly. Good luck, however, literally bends bullets out of your path and places “platforms” that rescue you if you miss a jump. I found this mechanic very interesting and I am looking forward to seeing what they can do with it as they progress with their development cycle. Oh, and you also have a duck companion. Let the lucky duck puns fly!

The moment to moment gameplay of Luckslinger consists of pretty basic action platforming. You are armed with a six shooter (that actually has only six bullets) that you must use to defeat enemies such as armadillos and gunslinging outlaws. You have the ability to dodge enemy projectiles by either jumping over them, or by utilizing the combat roll mechanic, and both feel very fluid once you get the hang of them. Another very interesting mechanic in Luckslinger was the recoil system. If you try to spam your gun, you will notice your bullets start to travel higher and higher on the screen and miss your target completely. Thus, timing your shots and making sure that you are always keeping your gun reloaded is a core mechanic if you want to survive in Luckslinger. The main concern that I have with Luckslinger is its lasting potential because of the simplistic nature of the gameplay. However, the fun the game provides, even in the demo, is enough to have me wanting more of the solid platforming action that Luckslinger provides.

My optimism for Luckslinger is enforced by their future feature list on their Greenlight page. With planned implementation of poker and Russian Roulette mini games, as well as one-on-one duels, I think that this will take care of my concern with the game’s lasting potential. Luckslinger’s spaghetti western atmosphere mixed with their hip hop soundtrack and interesting mechanics make for a fun experience, and I definitely recommend giving it a look. Don’t forget to try the demo, which you can find download links to on their Greenlight page, if you need some extra convincing.

I enjoy playing pretty much any type of game out there. My passion lies in finding the gems of the indie gaming world. When I'm not playing games, I'm programming them, at the gym, or tending to my small army of cats. Writing has always been a part of my life and I'm grateful for the opportunity to get my content out there for people to see.
@spf0227
Previous Announcement Trailer for DiscStorm Released
Next Delays in Gaming: Pros and Cons