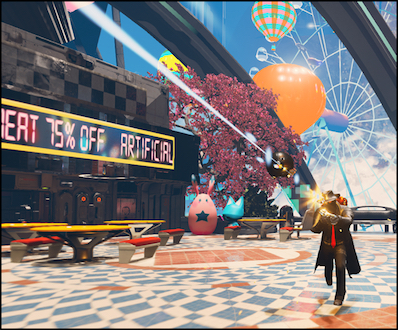 The Kickstarter campaign for Wormhole City has been announced by the game’s developer, Zenrok Studios. This science fiction adventure features third-person platforming, racing, puzzle and action elements. This title will allow players to explore the dystopian Wormhole City and interact with its citizens. The city is controlled by Megacorporation Grail Industries, however the company has not been a worthy ruler. The people are poor and have been ravaged by disease. An uprising is imminent.

The game allows players to use a variety of weapons, gadgets and accessories to explore the open-world Wormhole City. Players won’t just be on foot. They will be able to use a variety of vehicles from dump trucks to taxis. Players will also be able to participate in the high-action Mechalympics Racing Tournament. This immersive world will have a variety of characters to interact with and missions to undertake. Ground, sea and air patrols will be able to cause a good deal of trouble, however players are able to destroy them or hide from them. Wormhole City is expected to become available in March 2016. Backers from the $10 tier will receive a copy of the game for PC, Mac and Linux. Some of the stretch goals include Xbox One and PS4 versions of Wormhole City.

Zenrok Studios LLC was founded in 2014 by an experienced duo of video game developers. They have years of experience with a variety of game engines as freelancers for United States and South Korean developers working on artistic assets, game design, community management and marketing. This team is looking to create educational games that will appeal to all ages. The basic mechanics behind Wormhole City have already been developed. This includes the movement, gravity, 3D racing and platforming mechanics. If the campaign is able to reach its funding goals, then Zenrok Studios will be able to complete the game with extra art, animation and more content.

Kickstarter is the premier crowdfunding platform in the video game space. This service allows video game developers to pitch projects that aren’t commercially viable to the community. This has opened up new avenues for indie developers to fund their games and provided users with a variety of unique and interesting experiences.

I'm a gamer and a massive fan of anime. I'm a massive simulator geek. Who isn't? Simulators offer me the opportunity to experience something I wouldn't otherwise. Have you ever driven a train? I haven't, and I probably never will. However Train Simulator 2015 gives me the opportunity to experience what it might be like. I'm also a big train and space exploration geek.
@ivanmashkov
Previous Delays in Gaming: Pros and Cons
Next Steam Greenlight Spotlight: Ira