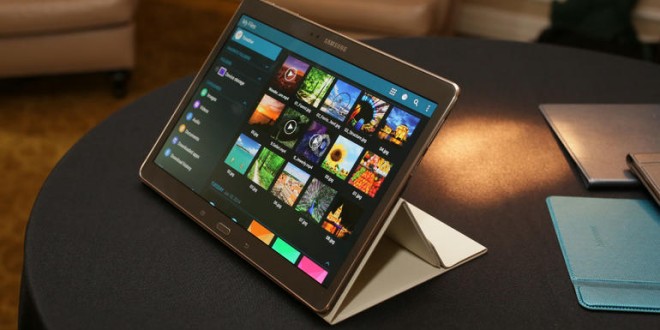 Remember those rumors back in January about Samsung buying BlackBerry? Well, those were quickly debunked by BlackBerry, but in turn the company let people in on a partnership that was ongoing between the South Korean and the Canadian company. Details about the partnership were just recently revealed at the CeBIT technology conference in Germany this weekend, and they’re definitely not what most people might have expected from BlackBerry, or Samsung for that matter. The new SecuTablet is the result of the partnership between IBM, BlackBerry, Samsung and Secusmart and it aims to become the ultimate tablet for companies that value their privacy and security.

BlackBerry‘s SecuTablet is essentially a modded Samsung Galaxy Tab S 10.5, which got a nice software overhaul from Secusmart, which is a company focusing on secure software for technology firms. With the talks around Android for Work and other platforms that try to divide work and play on a gadget without having users hauling two different phones in their pockets. The SecuTablet gets an overhauled Secusmart Security Card that will encrypt voice and data when using the tablet, as well as a tool from IBM that will keep work and play separate and in control of the company that deploys these new tablets to their employees.

The odd thing about this partnership is that Blackberry doesn’t really get much out of the SecuTablet. The modified Galaxy Tab S runs on Android, with a few added software options from BlackBerry, Secusmart and IBM, but that’s hardly a reason to call the slate a BlackBerry one. As John Chen tries to put the company which has seen its shares drop and popularity decrease, venturing into the tablet market on its own would have been detrimental, unless BlackBerry designed a tablet as unconventional as the BlackBerry Passport or the upcoming Slider with a hidden keyboard. According to the Canadian company, the SecuTablet will go on sale this Summer, and as expected, it is more of an enterprise and company offering rather than a consumer product. While interesting, the SecuTablet won’t be a hit until we find out how much the partners want to charge for the ultra-secure tablet. We’re thinking more than $400, which would be above the retail price of the Tab S 10.5 right now.

My life-long dream has been to test out every gadget on the market! Considering the fact that I've rapidly destroyed almost every gadget I've had so far, I'm not inclined to owning something, so my ideal outcome would be to have a different gadget each month. I'm really into smartphones, wearables and tablets and I love Playstation and Xbox, I'm sure I'll beat you at your own game (after a month of training... or two)
Previous Steam Greenlight Spotlight: Dungeons of Aledorn
Next Moto X 2013 Android 5.0.2 update set for release soon