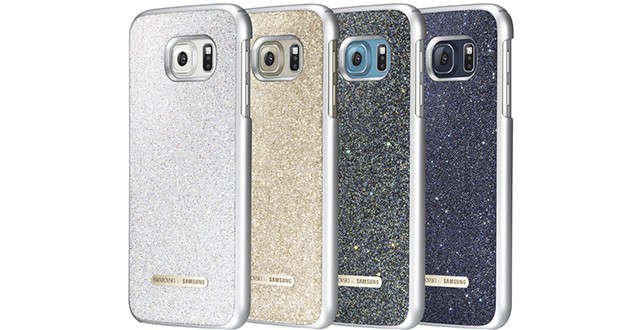 The Galaxy S6 is getting luxurious cases

The Galaxy S6 will be more fashionable with new accessories

Samsung announced that the Galaxy S6 would become one of the most fashionable handsets on the market, as the company wants to give customers the possibility of purchasing designer-made accessories that are fashionable and high-end. It seems the smartphone and wearable market are getting increasingly more influence form the fashion world, although it really doesn’t look like something users are actually asking for. The Galaxy S6 is sufficiently elegant as is, but it seems Samsung wants to add even more pizzaz to their new line-up.

Both the Galaxy S6 and the Galaxy S6 will be getting new high-fashion accessories, according to the South Korean company, from “top fashion brands”. These brands include Swarovski, Rebecca Minkoff, Burton, Romero Britto and Montblanc and they will be making cases as well as covers for the new flagships. We’ve seen what Swarovski can do with the Gear S smart watch, so we’re definitely excited to see the covers they will be designing for the Galaxy S6. Although the market for high-end fashion covers and cases can’t be as big as it is hyped, Samsung is definitely seeing some gain from their new accessory line-up.

This new Galaxy S6 and Galaxy S6 Edge accessory collection is being called the “premium collection”, and we’re expecting to see prices go sky-high. Nonetheless, it is a representative move from Samsung, even though rather unexpected for their smartphone line-up. According to the company, the purpose of these new accessories is to make the Galaxy S6 and its edgy counterpart even more appealing to the public, without covering up any of the new glass and metal designs that customers are already enjoying. From photos, but enjoying nonetheless.

There’s already a record number of pre-orders for the Galaxy S6 around the world and shipping should begin on April 10, if everything goes according to plan. The new accessory collection will be available starting April, as well. Although rumors say these covers and cases, alongside the wireless charger and battery pack from Samsung will be available at retailers across the world, my hunch is the designer-versions won’t be that readily available.

My life-long dream has been to test out every gadget on the market! Considering the fact that I've rapidly destroyed almost every gadget I've had so far, I'm not inclined to owning something, so my ideal outcome would be to have a different gadget each month. I'm really into smartphones, wearables and tablets and I love Playstation and Xbox, I'm sure I'll beat you at your own game (after a month of training... or two)
Previous Seven Dragon Saga Kickstarter Campaign Announced
Next 6 Reasons You Should Buy Cities:Skylines