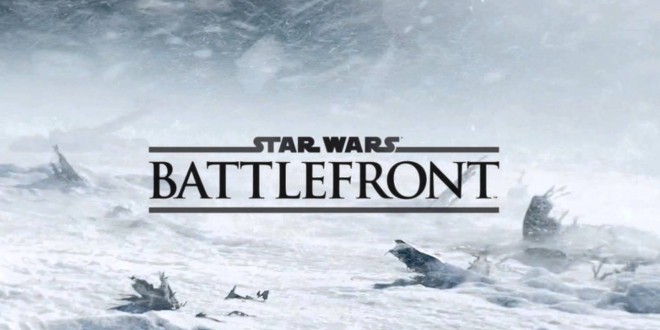 Ever since Star Wars: Battlefront was announced, there has been a ridiculous amount of hype surrounding the game, and with good reason. The original two titles in the Battlefront series were maybe some of the most-played games during their prime. I vividly remember playing hours upon hours of single player Battlefront and setting up instant action games hunting the Gungan menace on Naboo. Unfortunately, there has been so little shown or revealed about the game up to this point, as only a small teaser trailer exists for the game. However, we can now look forward to the reveal of the first official gameplay trailer for Star Wars: Battlefront, for which the date was just announced today.

Fans of Star Wars: Battlefront can look forward to viewing the trailer, which will debut at Celebration Anaheim on April 17th at 10:30 am Pacific. Those of you attending will be able to see some behind closed doors gameplay of Battlefront, as well as some currently unannounced activities. With this announcement of the gameplay trailer, there is going to be both excitement and extreme apprehension. EA has a chance to bring back not only one of the most beloved Star Wars licensed games of all time, but one of the most popular series period. We can only hope that what they show off lives up to what fans of the series are expecting, and that Star Wars: Battlefront’s gameplay remains faithful to the series while improving upon the original formula that made Battlefront so darn fun.

For those of us also looking forward to The Force Awakens, they will also be showing the second trailer, so look forward to seeing that as well. Finally, I have to ask, is anyone else just slightly worried that it won’t be all we expect it to be? With Battlefront being one of my favorite series of all time, I’d hate to see some unimpressive, bland gameplay. However, I think that DICE is more than prepared to create a game that will live up to the expectations of fans, and even though I am a bit worried, I am still very much looking forward to seeing the trailer on April 17th.

I enjoy playing pretty much any type of game out there. My passion lies in finding the gems of the indie gaming world. When I'm not playing games, I'm programming them, at the gym, or tending to my small army of cats. Writing has always been a part of my life and I'm grateful for the opportunity to get my content out there for people to see.
@spf0227
Previous Steam Greenlight Spotlight: Flying Tigers: Shadows Over China
Next Original Xbox supposed to be free, Nintendo should have been Microsoft

Next month will see the release of Star Wars Pinball on the Nintendo Switch, mixing ...