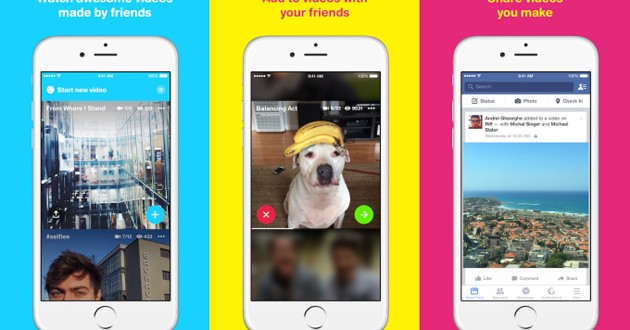 Facebook didn’t prank anyone on April Fool’s Day, but they did launch the new Facebook Riff app, a video creation app that is supposed to improve your connection with friends. The new Facebook Riff app is already online in the Google Play Store and the Apple app store, and already has a couple of thousand downloads, not to mention a good ration from more than 120 users who have already tried out the app.

Facebook Riff aims to give users yet another tool to fend procrastination off a bit, by creating videos and then allowing your friends to add to these videos and forward them along, so that more people can contribute to the creative process. As Facebook as a company and network broadens its reach into virtual reality, video making, advertising, Messenger apps and many more, users are starting to get a wee bit tired of all the things they are being offered.

With Facebook Riff, you get a rather simple app that lets you create and edit videos in a very basic way, and then share them with your friends so that the creative process can be intensified. Although most users say that the app works well, there are some out there who have pointed out the “beta-feel” of the entire app. Some of them have reported that their videos won’t upload, stay stuck uploading, won’t open or won’t be shared with other people. As this is the first edition of a finite Facebook Riff app, it’s expected that users will find a couple of bugs and issues. Zuckerberg hasn’t said much about Facebook Riff, but we’re fairly sure that updates for the app are incoming soon enough.

The feeling I get from Facebook Riff is that it wants to be a type of Vine, Snapchat or even Meerkat, although without the live streaming bit. It sells itself as a separate network where you upload your videos and keep them separately from your other activity on the social network. You can still share these videos in news feeds and timelines on Facebook, so there’s a good deal of integration going on as well. You can create videos on the spot or upload ones that you already have on your phone. The app takes a bit of getting used to, but nothing to rocket-science-y, so to speak.

My life-long dream has been to test out every gadget on the market! Considering the fact that I've rapidly destroyed almost every gadget I've had so far, I'm not inclined to owning something, so my ideal outcome would be to have a different gadget each month. I'm really into smartphones, wearables and tablets and I love Playstation and Xbox, I'm sure I'll beat you at your own game (after a month of training... or two)
Previous Steam Greenlight Spotlight: Yasai Ninja
Next Ban on anime forthcoming in China

Thousands of Snapchat pictures were stolen and posted online by hackers

Selfies app for Android available for free on Google Play

With selfies being ever so popular these days somebody was bound to create an Android ...