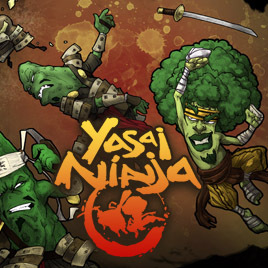 Today’s Greenlight submissions were a no-go, so I decided to revisit something that caught my eye from yesterday’s submissions. Yasai Ninja stood out to me because of its unique theme and art style. Ninja vegetables is something that I’ve not seen before in a game, and I always applaud innovation in any way when it comes to game development. Unfortunately, so many games pop up on Greenlight that are clones of survival horror games, retro platformers, and “simulators”. Everyone has the right to make whatever type of game they like, but if it is so similar to something that’s already on the market, good business sense will tell you that your product will not succeed. This, however, is not at all the case with Yasai Ninja. When I clicked on the page, I was met with a refreshing change of pace from dark and dreary horror environments and badly-drawn 2-D platforming worlds.

Yasai Ninja is a 3rd person hack-and-slash adventure developed by Reco Technology. The game offers two modes of play: single player and a cooperative mode. In the single player, you have the ability to switch between the two characters, Samurai Onion and Broccoli Joe. Samurai Onion has been captured by his former shogun, a cucumber named General Cucumber Kyrui. In his cell, he is accompanied by a foreigner named Broccoli Joe who convinces Samurai Onion to escape and take vengeance on his former Shogun. In order to have his revenge, Samurai Onion must enlist the other tribes of the land, such as The Renegade Cucumbers, The Leeks, and Asparagus.

The gameplay of Yasai Ninja is broken up into three separate types of missions. First, you have the speed missions, which have few enemies or puzzles to solve, and typically have a disaster following the heroes as they try to escape the area as quick as possible. You also have the fighting missions, which usually take place in open areas and are populated with enemies that must be defeated in combat in order to proceed. The last, and least frequent type of levels are based around puzzles. These levels are planned to be a bit slower, as they task you with solving a puzzle in order to achieve victory. 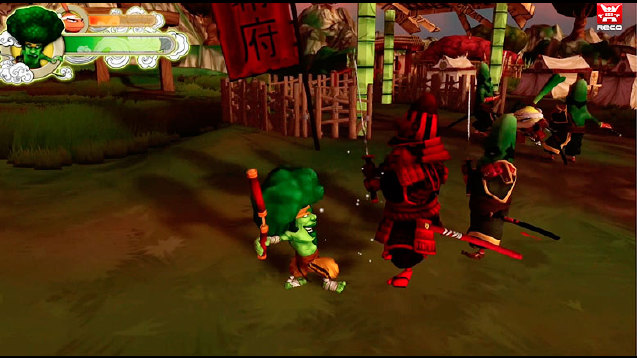 Yasai Ninja’s gameplay doesn’t look like anything spectacular at this point in time, but as they continue development I can definitely see it improving. The basic idea and mechanics that they have so far seem like something that I would be very interested in playing. As I said earlier, even though Yasai Ninja may not be the best-looking game or the most amazing in terms of what we’ve seen from its gameplay, I really applaud Reco Technology for trying out something new. The game looks great in its own right, as it possesses a unique style that we haven’t seen from too many other titles. As gamers, we are always clamoring for innovation and looking for something different, and Yasai Ninja is looking to provide just that. If you’d like to check Yasai Ninja out, you can find it on Steam Greenlight, where you can consider leaving a vote and some constructive feedback.

I enjoy playing pretty much any type of game out there. My passion lies in finding the gems of the indie gaming world. When I'm not playing games, I'm programming them, at the gym, or tending to my small army of cats. Writing has always been a part of my life and I'm grateful for the opportunity to get my content out there for people to see.
@spf0227
Previous Asus intros Chromebook Flip and Chromebit
Next Facebook Riff is a collaborative video project app