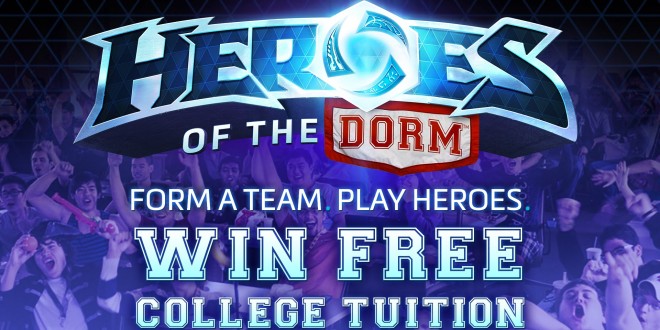 Anyone feeling the NCAA March Madness hangover are in for a treat. Place your bets, because Blizzard is hosting a nationwide tournament affectionately dubbed ‘Heroes of the Dorm.’ Puns aside, the tournament is limited only to college students where the winning team will receive college tuition. With a total of 64 teams, each team will represent their university. The final four teams get an all-expense paid trip to Los Angeles, California where the finals will take place at the Shrine Expo Hall hosted by ESPN. The finals will be broadcasted via ESPN 3. The final four will also receive gaming rigs courtesy of Blizzard.

Though registration is over for the Heroes of the Dorm tournament, fans of Blizzard’s MOBA can still participate by creating brackets to predict the winner of the tournament. According to the tournament website, the top 5 participants that accurately predict the outcome of the tournament can win prizes like an “Epic Gaming System,” a HyperX Cloud II Headset, and a SteelSeries Heroes of the Storm mousepad. The top prediction will receive $10,000 on top of the other prizes. All participants that create a bracket will receive an in-game portrait of Diablo character Azmodan. Randomly selected winners can also receive a SteelSeries Heroes of the Storm mouse or a $20 Battle.net gift card in addition to the prizes listed above.

Blizzard’s foray into the MOBA market stands out because of the mainstream exposure it will have once the finals begin. Hopefully, the ESPN 3 broadcast of the finals will help eSports stand out as a viable competitive sport. Heroes of the Storm wouldn’t be the first. Competitor Riot Games’ League of Legends have had tournaments broadcasted on ESPN as well. Regardless, this tournament should stimulate the growth of eSports in general. Click here to create a bracket and make sure to hurry up, registration for tournament brackets end on April 10th.

Heroes of the Storm is Blizzard’s MOBA game and is currently under closed beta for the PC and Mac.