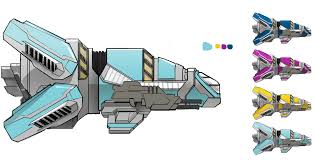 The big event in my neck of the woods this week is the East Coast Game Conference, a fairly small gathering of developers both small and large. Featuring companies such as Epic Games, Red Storm Entertainment, and Insomniac, ECGC is less of a games showcase, and more of a collection of various development talks to attend to inspire and educate those of us interested in pursuing a career in the field. To my surprise, however, this year was quite different to the past few times I’ve attended the conference. I ran into the Puny Human team, who have worked on titles such as Blade Symphony and Dystopia in the past, and are now working on a fantastic game known as Galacide.

I was drawn to the booth by the impressive visuals and effects that were flashing up on the televisions that were being used to display their game, (not to mention some of those bright purple dev shirts), and immediately became interesting in finding out what Galacide had to offer. Upon sitting down with the game, I was greeted by a group of extremely friendly developers who assisted me in understanding the basic rules and controls of Galacide. The game was described to me as a combination of a shoot-em-up and a puzzler, or a shmuzzle game. Galacide is a mixture of bullet hell games such as Jamestown and match 4 games. The gameplay demo focused solely on endless mode, which meant that we were simply to attempt to survive as long as possible. In order to progress in Galacide, you must shoot enemy ships as they fly towards you and collect the colored bits that they drop. Once you’ve collected a bit of a certain color, you can then fire it at the bit wall to create matches which will remove that section of the wall, allowing you to proceed. The goal was simple, but surviving for a lengthy amount of time can be quite challenging.

A huge amount of praise must be given to Galacide for its fantastic innovation when it comes to combining two genres that, to my knowledge, have never been merged in the past. What results is a fantastic and entertaining game that I found myself coming back to over and over again. If I wasn’t playing Galacide, I was standing at the booth watching others play. This is where the other side of the game really shines. The visual aesthetic of the game cannot fully be appreciated when you are playing, as you are focusing so hard on creating matches and staying alive. However, once you step back and watch others play, you really begin to notice all of the small detail put into the backgrounds, as well as in the individual nodes that make up the bit wall. Each node has an eye that blinks every few seconds, and they all feature some really nice visual effects as well. Not only are the visuals fantastic, but the gameplay just felt so polished. The movement controls were extremely smooth and I never felt hindered by the controls in any way.

Galacide is set to be released on Steam Early Access within the next few weeks, and when I get an exact date I will be sure to update this article. For anyone who is a fan of hectic space shooters and/or puzzle games, I could not recommend Galacide more. I would go as far as to call it a masterpiece in a genre all its own. Puny Human have expressed desire to also include a single player campaign-style mode where you attack puzzles with set amounts of pieces and must use them in strategic ways to solve the puzzles, as well as the inclusion of various boss fights, which no shoot-em-up is complete without. With such a simple concept, Puny Human have really taken something that could have been quite bland and turned it into one of the most fun games I have played this year. I cannot wait to get my hands on a copy of Galacide, and I urge everyone to keep their eyes peeled for the upcoming release on Steam in the next few weeks. If the game is this good in Early Access, imagine the possibilities when the time comes for a full release.

Edit: The best place to find news and updates for Galacide is on Puny Human’s Twitter.

I enjoy playing pretty much any type of game out there. My passion lies in finding the gems of the indie gaming world. When I'm not playing games, I'm programming them, at the gym, or tending to my small army of cats. Writing has always been a part of my life and I'm grateful for the opportunity to get my content out there for people to see.
@spf0227
Previous WoW Tokens: A New Way to Pay Your WoW Subscription
Next Steam Greenlight Spotlight: Little Devil Inside