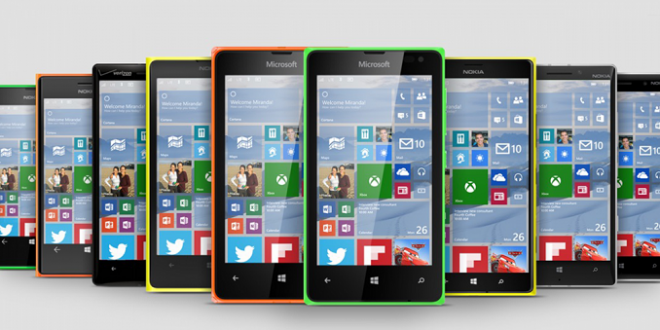 Excited for Windows 10 for Phones ?

Windows 10 is slated for a Summer release and Microsoft will most likely coordinate the desktop software release with the mobile operating system one. The Redmond giant has confirmed in the past that it is going to launch multiple flagship smartphones once Windows 10 for phones is out, but there has been no news on that front ever since. Nonetheless, images of the new Windows 10 for phones operating system keep popping up on the internet, and the newest batch have just been picked up on the Chinese social network Weibo.

The leaked Windows 10 for phones images come in anticipation of the release of a new technical build of the software which should be sent out to developers and insiders today. The new build will most likely include a new task switcher, calendar and a redesigned user interface. Until the update hits compatible device, we can glare at the leaked Windows 10 for phones images and see what they reveal. If you look closely, since the images aren’t high quality, you will see the new multi-tasking screen, which will help you toggle between active apps on your Windows 10 phone.

Surprisingly, the leaked Windows 10 for phones images also show off Spartan for mobile, too. We can’t see a lot of it, but we can confirm that the new technical preview of Windows 10 for phones will have Spartan on board, which is nice. At the same time, the default messaging app in Windows 10 also seems to have received a new design treatment, alongside the outlook calendar. Since the software in the photos is in Chinese, most of you probably won’t understand what you’re reading, but the important thing is that we’re seeing some nice UI changes, which although minimal, might be incremental. Microsoft still has a lot to do with Windows 10, but this Windows 10 for phones hands on seems to prove that the company is on track and progressing with the development process.

Windows 10 and Windows 10 for phones should be released around July 2015, as Microsoft is fairly confident that by the time we hit Fall, they’ll be finished with the software. We’re not entirely sure if we should keep these deadlines in mind, as most likely feedback will be crucial and will change the release timeline. It’s still a pretty popular experiment, so to speak, as we’re seeing more and more people participating in the insider programs, downloading the technical previews for both the desktop OS and the mobile one and providing feedback to the company. It seems like people are excited about Windows 10 and more excited about making it as fun and useful as possible. Check out the gallery below and try to match these with the current technical preview.

My life-long dream has been to test out every gadget on the market! Considering the fact that I've rapidly destroyed almost every gadget I've had so far, I'm not inclined to owning something, so my ideal outcome would be to have a different gadget each month. I'm really into smartphones, wearables and tablets and I love Playstation and Xbox, I'm sure I'll beat you at your own game (after a month of training... or two)
Previous Can MLG.TV challenge Twitch’s streaming service?
Next Android 5.1 and Sense 7.0 coming to the One M8