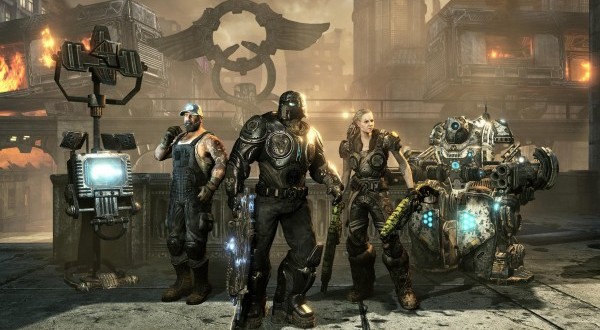 Gears of War 4: Fact and Fiction

Four years have passed since the release of Gears of War 3 (September 20th, 2011 seems so long ago).  Since then, we were left wondering what would become of Marcus Fenix and the recovery of Sera.  While we waited for the next installment of this beloved franchise, developer Epic Games decided to journey back to the past with Gears of War Judgement.  Despite it’s shortcoming, Judgement gave players an inside look into the character Baird, and how him and Cole were such close companions during the war.  However, something has stirred the surface.

There have been rumors concerning the release of Gears of War 4.  What is known is that the game would be developed under Black Tusk Studios.  These guys are a fairly new developer and were tasked with the project to compete with Halo.  Although there is no official news, Microsoft has teased players that a new one would be available for the next-gen consoles.  The details would be released during the 2015 E3 conference where, another rumor has it, that Black Tusk Studios would inform the public of  Gears of War.

Players were also curious to see if game would come out for the Xbox 360.  After all, many developers continue to make games for the last-gen console since some of them have yet to move onto the next-gen consoles.  However, Black Tusk Studios remarked that if the game were made, it would not be coming out for the 360.  This makes sense because the advanced graphics would be too much for the 360’s processors.

In an interview with IGN, Microsoft’s Phil Spencer said, “I think we can make sure that we’re investing in this thing for the next decade, which is how I want to think about it. The thing that was great about the early Gears of War games, to me, was just the epic scale of the settings that I was in. I think the story and the setting and what they’re going through in a Gears of War—the name of the game, it really meant something to what that game was about. We’ve got to get back to that. The feeling of those individuals.”

When he's not venturing Hyrule, he's probably out on the tennis courts. His Y-axis is always inverted.
@slimjimmy_
Previous Google’s Designed for Families taps into family-friendly content
Next New Guitar Hero trailer revealed