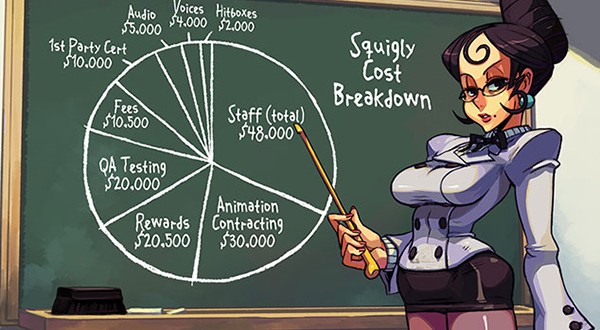 It doesn’t really feel like it’s been two years since Skullgirls crushed its indiegogo campaign goals. The fan support for this game raised nearly $830k, funding the addition of several new characters to the roster. Beowulf is one of two characters that were voted into the game by the fans, and it looks like this character is going to be a riot. Today, he’s bringing “287 pounds of folded steel and sex appeal” to join in on the action!

Beowulf, the second male character to join the cast, is heavily based upon the old English hero of the same name. If you’re familiar with the fable, you’ll get a chuckle out of how he wields the Grendel’s arm in some of his special moves. Beowulf is a retired professional wrestler who’s decided to end his retirement to fight against the skullgirl. His personality really shines with the way he moves. Watching him carry his opponent around like a Final Fight enemy, howl as he dives on the opponent with a moonsault is pretty entertaining.

When Beowulf isn’t hitting you with a chair, he’s making the stage feel just like a wrestling ring. An interesting nuance of his playstyle is his ability to hype up the crowd. By doing specific moves, or taunting his opponent, Beowulf builds up to three levels of “crowd hype” that give him various buffs. For the first three months after his release, Skullgirls fans can “drop the mic” for free. If you miss the window for the freebie, you can purchase him later for $4.99.

My name is Maxwell Noir, and I've been absolutely enamored with video games for as long as I've been able to hold a controller. So naturally, over the years I ended up taking an interest in writing about them. When I'm not buried waist-deep in a digital world, or writing about my adventures within them, I can be found somewhere in the analog world, trying to apply what I've learned to life. (Yes, life IS a game.)
@@MaxwellNoir
Previous Ultra Street Fighter IV coming to PS4 next month!
Next NA LCS Spring Finals Preview