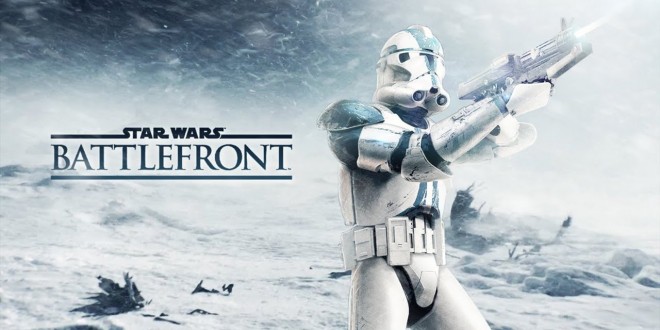 Have you seen the latest trailer for Star Wars Battlefront? If not, you can take a look below.  The breathtaking trailer of the upcoming Star Wars Battlefront is awesome.  For ten years, we have waited for this game to come out.  We have endured setback after setback, until we faced the grim reality that maybe Battlefront 3 was not going to be released. Now, we know the answer.  DICE has delivered upon its promise and revealed, by far, the best sequel of the decade. Forget every other game you’ve played.  This is a throwback to the kids that spent countless hours on Hoth and Yavin IV driving their AT-ST’s and leading their stormroopers to victory.  And to the new generation of gamers, you need this in your collection.  It doesn’t matter if you’re an Xbox or Playstation owner, this game is for everyone.

The trailer begins with the Battle of Endor.  The Rebels and the Empire scramble for different positions and the air is alive with blaster-fire.  Both sides are taking casualties and are struggling for the upper hand.  The scene switches to Hoth were the Snowspeeders are taking to the skies against the fearsome AT-AT walkers.  Then we’re taken to an unfamiliar map where TIE Fighters and X-Wings (along with a special appearance by the Millennium Falcon) are blasting away at each other.

So much was revealed in the trailer.  There were familiar weapons, new gadgets, and an impressive amount of detail.  One gadget was a portable shield that someone could deploy in the heat of combat.  Another was that the anti-armor class had a jetpack to maneuver around the battlefield.

If viewers were playing close attention, you could see that a variety of aliens are included in the Rebel cause (no sign of the Bothans yet).  It also looks like that players can call in orbital strikes, judging by how the Rebels neutralized the AT-AT.  We also see the return of iconic Star Wars figures, such as the Sith Lord himself, Darth Vader. The reveal trailer for Star Wars: Battlefront is an epic teaser.  Everything that DICE has promised us is seen in the video.  We can only wait until November 17th arrives.

When he's not venturing Hyrule, he's probably out on the tennis courts. His Y-axis is always inverted.
@slimjimmy_
Previous NA LCS Spring Finals Preview
Next 2K Australia Gone for Good

Next month will see the release of Star Wars Pinball on the Nintendo Switch, mixing ...