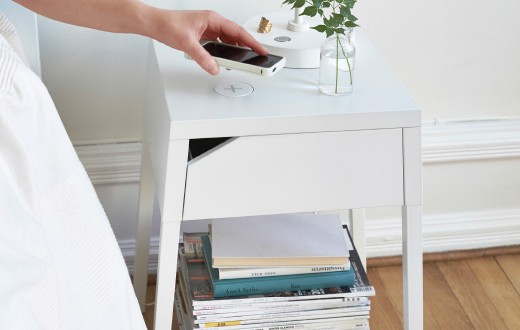 Wireless charging furniture from Ikea coming to the U.S.

Ikea is getting with the times and with the world of the internet of things, as the company has announced that it would introducing wireless charging furniture into the U.S. furniture market soon enough. Imagine laying your phone or smart watch down on your classy Ikea couch and having it charge wirelessly while you take a nap or watch Netflix. Sounds really fun. At the same time, imagine an Ikea counter in your kitchen on which you place your tablet and watch that complicated tutorial on how to make fruitcakes which takes about an hour. While watching that, the wireless charging counter will keep your tablet powered so that you can watch and rewatch that tutorial and curse for not being able to follow the instructions. True story, save for the wireless charging counter part. And the Ikea part, but hey, each to their own.

In any case, it was an expected announcement from Ikea as more and more people think about the convenience of having wireless charging furniture instead of one, two or even three different charging pads in your house. Just lay everything out on a connected Ikea table and it’ll do the trick. The frustration people go through because of wires seems to be hitting an all time high as we have more and more devices in our homes and the move from Ikea to introduce wireless charging furniture seems smart, if not groundbreaking.

Although the official announcement from Ikea came earlier this year, Ikea has finally come out with a release date for the wireless charging furniture that would be going mainstream soon. According to the company, the wireless charging furniture will be hitting stores across the United States this Spring and it will be marked by a + so that browsers in the Ikea stores can easily pinpoint the high tech pieces they want in their collection. Also, these + signs will mark the spots on where you can place your devices in order to benefit from actual wireless charging. What’s more, Ikea decided that it would be even smarter to also incorporate standard USB charging ports into these furniture pieces for those devices that don’t have wireless charging compatibility.

Price of wireless charging furniture varies depending on model, but the cheapest ones are lamps and nightstands that go for about $70, According to Ikea, other pieces of furniture will be added to the line-up of wireless charging-enabled furniture this year, so we’re definitely looking forward to that counter I was talking about earlier.

My life-long dream has been to test out every gadget on the market! Considering the fact that I've rapidly destroyed almost every gadget I've had so far, I'm not inclined to owning something, so my ideal outcome would be to have a different gadget each month. I'm really into smartphones, wearables and tablets and I love Playstation and Xbox, I'm sure I'll beat you at your own game (after a month of training... or two)
Previous Oppo R7 design is most impressive of all
Next Xperia Z4 launched, but it’s not the phone we expected

The Next Galaxy: Galaxy S6 teased in promo video

Moto Maxx is the international version of the Droid Turbo

Verizon has already launched the Motorola Droid Turbo, which is considered by many a direct ...