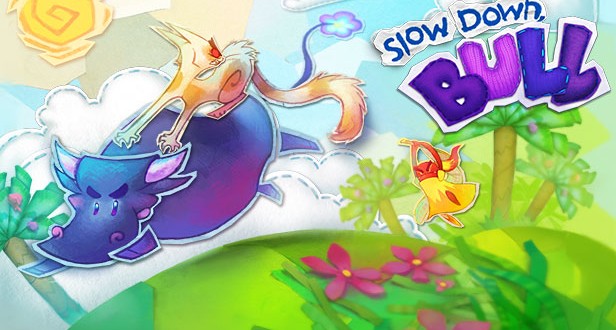 *To be clear, this is not a full review, it is just a quick rundown of my first impressions after completing the first three worlds of the game*

For those who don’t know, Slow Down, Bull is Insomniac’s first ever PC release. The game was created as more of a design experiment by designer Lisa Brown, who was asked to create five ideas for games and ended up settling on Slow Down, Bull as her favorite. You are put into the hooves of Esteban, who is an artsy bull with a passion for creating beautiful works of art. You must collect decorations throughout the levels and deposit them at designated drop-offs before the time runs out. The interesting mechanic is that Esteban continuously runs until you press the left or right triggers (if you’re using a 360 pad, which I recommend), which then stops the action and allows you to rotate. However, the longer your hold the rotation, the more angry Esteban gets, which eventually will lead to him becoming stressed out and destroying all of the decorations in your possession. 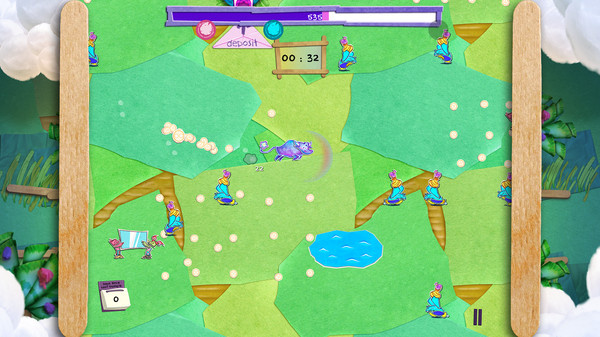 Now that we’ve covered the basics of Slow Down, Bull, let’s get into the real question: Is the game fun? Slow Down, Bull greets the player with a silly and lighthearted story, and throws you right into the action. I found the tutorials to be extremely easy to understand, and I had no problem picking up the controls and understanding exactly what I needed to do. One mechanic that I had to practice a bit was the idea that you can bounce Esteban off of walls in order to increase your speed. Maintaining your speed is very important, especially in the later levels where you are being chased by the bull-catcher. However, there is a risk-reward system in place with the speed, in the sense that the faster you go, the harder it can be to avoid upcoming obstacles and I often found myself running so fast that I was unable to react and ended up colliding with an enemy. To be completely honest, Slow Down, Bull is as simple as it gets control-wise, but there is a fair amount of challenge to be had, and the difficulty progresses in a manageable curve to keep the game fresh and challenging.

On top of the gameplay, Slow Down, Bull showcases one of the more interesting visual aesthetics that I’ve seen in recent memory. The game looks as if it was made as part of a children’s craft project. This is not to say it looks terrible, but the levels contain elements of construction paper, popsicle sticks, and other items that you would typically see children using in their craft projects. Also, many of the character objects look as if they’ve been colored in with crayon, which just fits so well with the theme of the game. The lighthearted and colorful visuals combined with the simple, yet challenging gameplay also make Slow Down, Bull a great game to play with kids, as it is very easy to pick up and play. 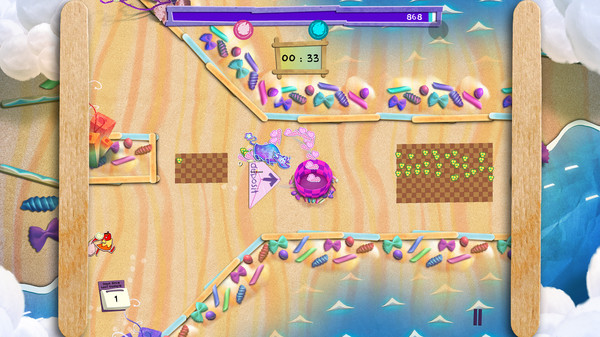 Finally, Slow Down, Bull is not going to be a lengthy game if you just run through all five worlds, so don’t go in expecting a ten hour epic. Length is really added if you decide to go back and 100% all of the levels, meaning collecting all decorations and making sure Esteban does not get stressed out. There are also various medals and awards to earn through gameplay, and you can track your stats through the main menu. Priced at $5.99 and making donations to Starlight Children’s Foundation, I see no reason not to grab a copy of Slow Down, Bull. While the game isn’t going to win any awards in terms of entertainment value, it is a great example of a game that you can pick up and play for twenty or so minutes at a time for some quick enjoyment. The game’s simple mechanics manage to create challenging and entertaining combinations that will definitely provide enough value for what they are asking for the game. If you’re interested, you can grab Slow Down, Bull on Steam for $5.99.

I enjoy playing pretty much any type of game out there. My passion lies in finding the gems of the indie gaming world. When I'm not playing games, I'm programming them, at the gym, or tending to my small army of cats. Writing has always been a part of my life and I'm grateful for the opportunity to get my content out there for people to see.
@spf0227
Previous Neverwinter Belongs on every Xbox One
Next iPhone is the terrorist phone according to government