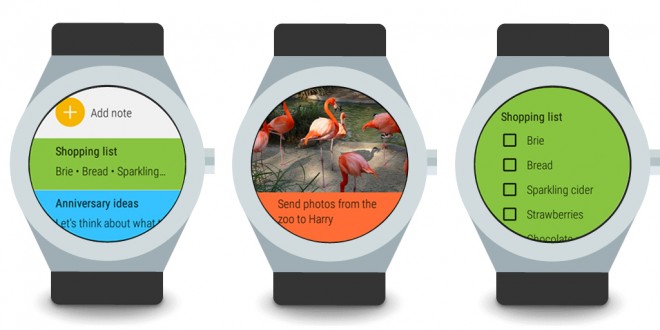 Google Keep is one of the most popular note-taking apps on Android, and its popularity has migrated over to the company’s Android Wear platform for wearable devices as well. Google Keep for Android Wear has been around for quite some time, but today Google released an update for the app that makes note-taking, list-making and organizing much easier and more fun on a smart watch.

Google made the news with the new Android Wear update that added Wi-Fi functionality to watches, making them stand-alone devices as long as Wi-Fi was around. Today, Google is making headlines again with the new Google Keep app that has gained full Android Wear support. That means that the entire Google Keep app can now be accessed from your wrists, so that you can check out your lists, photos and notes right on your wrists, which is a handy update, maybe even a bit late to the game.

Google Keep has also been integrated with voice commands on Android Wear, as you can now tell your smart watch to take some notes and dictate those notes directly to your wrists. Pretty futuristic, if you look at it from a different viewpoint. Although what seemed futuristic to people five years ago is already ready, it is still nice to see that OEMs are constantly coming up with ways in which to amaze customers.  Seeing as you can now use Google Keep on your wrist as you would on the phone, this update adds a ton of functionality to Android Wear as whole.

Moreover, word is that Maps for Android Wear is also getting jiggy in testing labs and should yield in a new app for the wearable platform. According to some teaser images released by Google, Maps on Android Wear will be able to even send photos to your contacts from the places you visit. Of course not photos taken with the watch. Nevertheless, it looks like the updated Google Keep is just a step in a long road to improvement and to Android Wear 5.1.

My life-long dream has been to test out every gadget on the market! Considering the fact that I've rapidly destroyed almost every gadget I've had so far, I'm not inclined to owning something, so my ideal outcome would be to have a different gadget each month. I'm really into smartphones, wearables and tablets and I love Playstation and Xbox, I'm sure I'll beat you at your own game (after a month of training... or two)
Previous Apple launching new iPod Touch next month
Next Steam Greenlight Spotlight: The Intergalactic Trashman

It’s official folks, Samsung is jumping on the round band wagon this year with a ...