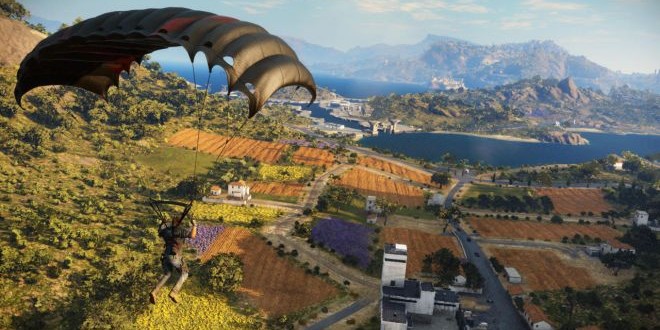 There was an announcement for April 28 concerning Just Cause 3. Apparently, a game-play reveal trailer is set to come out. For five years, gamers wondering if a sequel would come for the franchise. After the countless hours of racing around Panau, players can finally put the game to rest. With the reveal date only a few days away, players are excited to see what Avalanche Studios has in store for them.

Gamespot has screenshots of the upcoming game. There’s one of Rico parachuting, and below him is a beautiful view of the environment. Buildings cast their shadows, the grass looks real, and the graphics are amazing. There’s another image of Rico driving a car. Behind the car, it appears he is dragging two gas barrels. It looks as though players will be able to attach more than one object together. Another image has Rico shouldering an RPG, and standing on top of a moving plane.

The Just Cause Twitter has a seven second game-play teaser that reveals three distinct settings. One has a jet flying past a statue, the other has Rico bouncing through a field of flowers, and a helicopter colliding with a car in a gorgeous explosion. They tweeted, “And the chaos ensues. #JustCause3.”

Gamers have been waiting for a Just Cause sequel since the second one was released back in 2010 (coincidentally, Just Cause 2 was released on March 23). There are hundreds of videos on Youtube with players experimenting with the game’s physics. Using Rico’s grappling hook, players can attach anything to anyone. The possibilities were endless. You could attach an NPC to a gas tank, and shoot them up into space. You could attach cars to helicopters.  The world was your playground.

Gamers are curious to see if there will be any new elements to the Just Cause franchise. Aside from attaching multiple objects, that’s about it. Until then gamers, stay by your computers, and be ready for the unveiling. Prepare for anything.

When he's not venturing Hyrule, he's probably out on the tennis courts. His Y-axis is always inverted.
@slimjimmy_
Previous How Will Windows 10 Impact Gaming?
Next Valve Allows Modders to Charge for their Creations