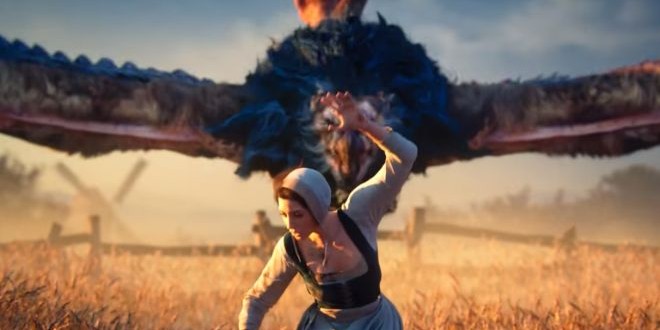 May 19 is only a few weeks away. Anticipation couldn’t be any higher as CD Projekt’s The Witcher 3 promises to outdeliver Bethesda’s classic, Skyrim. By learning from it’s mistakes in The Witcher 2, CD Projekt has given new life to the world of Geralt, as an army known as The Wild Hunt invade the Northern Kingdoms. Players, old and new, will be shocked to find the amount of the content this game contains.

The Witcher 3’s TV spot video is a hauntingly familiar scene of the Dovahkiin fighting the dragon. Here, Geralt challenges a beast. The seriousness of the trailer is a departure away from the lightheartedness of the Skyrim story.

Along with Geralt, The Witcher 3 introduces Ciri. She’s a female character that’s playable for certain moments of the game. According to HardCoreGamer, CD Projekt Red’s Robert Malinowski described the character as, “Ciri is playable only during certain moments in the game –You won’t play as her for long periods of time, but since she’s crucial to the plot, we thought that additional insight will allow gamers to better bond with this cool character.”

Unlike The Witcher 2, where newcomers found themselves overwhelmed by the controls, The Witcher 3 makes it easier for them to jump into the game.  At the same time, player’s actions have the ability to affect how the world views them.  Even though Skyrim sort of played on this, you didn’t get the “I feel like a villain/good guy” vibe.  According IGN, Senior Writer Jakub Szamałek said, ““sometimes the attitude of NPCs will be different to you, depending on what your relationship had been in the past. Sometimes you’ll have a different side quest depending on whether you did or did not do something in the previous game. So, there’s a lot of small and bigger ways in which we make you feel that what you did in the past is taken into account.”

When Skyrim was released, the gaming community swarmed over the amount of content that Bethesda crammed inside. Skyrim had all sorts of things players could do. They could hunt trolls, dragons, even take out bandit leaders. Players could also marry, own property, smith objects, and make meals.

At the same time, Skyrim was gorgeous, the mechanics were flawless, and it never ended. The Witcher 3, will bring to gamers an expansive world, one that is larger than Skyrim.  And the amount of content they’ve crammed into the game is ridiculous. With the map being three times the size of Skyrim, players should expect all sorts of new characters, monsters, even landscapes. Until then gamers, stay tuned, because The Witcher 3 is on its way.