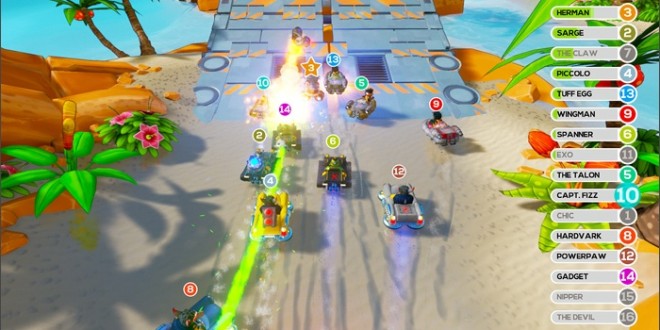 Today’s spotlight is on Space Dust Racers, a racing game inspired by classic party games such as Rock n’ Roll Racing and Micro Machines. The game is developed by Space Dust Studios, an indie company formed by industry veterans with experience on various EA titles such as Battlefield 4 and the Dead Space series. Considering the backgrounds of the developers, it was not a surprise when I noticed that the quality of their game was exceptional, from the music on down to the visuals. For a game in such early development, Space Dust Racers already is looking extremely polished, and that makes me even more interested in seeing what is done with the game as the development progresses.

Space Dust Racers is a game that is best played with friends locally, however it also features the ability to play online in up to 16-player matches. The extremely interesting feature that Space Dust Racers has is the fact that you can control the game with the use of your smartphone as a controller. While I have seen this done before with games such as Fibbage, it is definitely not something I’ve seen done with a racing game, and I’m really intrigued by the idea that your phone can become a controller. However, this also brings up some concerns that the phone will really take away from the gameplay, as we all know touch controls can often be really ineffective and clunky. Hopefully, Space Dust is able to make use of the phone in not only a unique way, but also a practical manner as well. 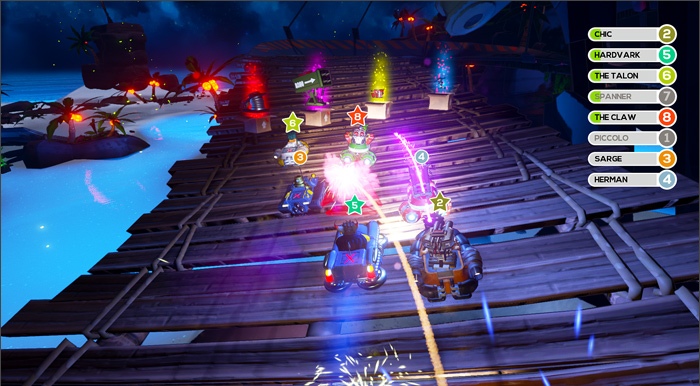 When playing Space Dust Racers in multiplayer, every player shares the same screen. This means that unlike other party racers such as Mario Kart, you will have to keep pace with everyone else or risk behind left behind. If your racer manages to get left off screen, then you are forced to wait until the next round to join the race again. I really enjoy this mechanic as it prevents the gap between first and last from becoming ridiculous. On the other hand, I can also see a really great player dominating everyone else and having all of the competitors die from falling behind. I understand, however, that this is more of a player issue and not a game issue, so I don’t find it too troubling.

Much like its predecessors, Space Dust Racers allows you to grab weapon pickups to boost yourself or slow down your enemies. It definitely seems to be going the route of over-the-top action racing, and I have to say that I could not be happier with this. As a huge fan of games such as Mario Kart, I really enjoy the competitive nature of the games combined with the feeling of unease at being in first place. Just because a player is in first for the majority of the race does not mean that they will win, as the weapon pickups, traps, and other hazards can alter the race at any time and force that person in first place to be bumped back. Some people find this to be frustrating (i.e. blue shell in Mario Kart), but I always found it to be a great mechanic to keep the game balanced when you have players of various skill levels playing a game. Since Space Dust Racers features smartphone control and up to 16 players, we can definitely expect some non-hardcore gamers to be taking part in the fun, and having weapons and boosts will definitely do a great job keeping the game fair and balanced. 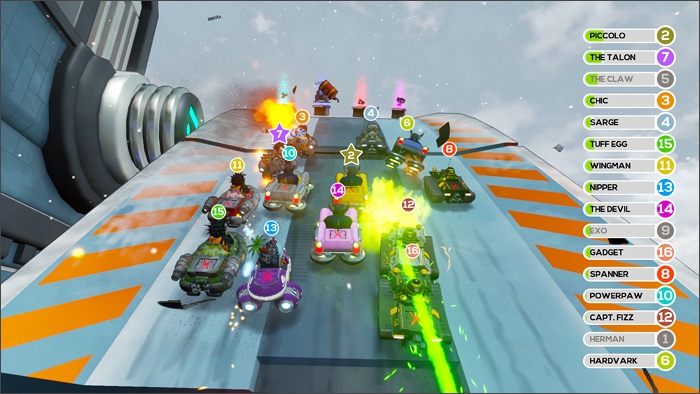 If you’re interested in finding out a bit more about Space Dust Racers, you can find it on Steam Greenlight, where you should definitely consider leaving a vote and some constructive feedback. Also, be sure to visit the game’s Kickstarter and leave a contribution to assist in development of more characters and stages to race in.

I enjoy playing pretty much any type of game out there. My passion lies in finding the gems of the indie gaming world. When I'm not playing games, I'm programming them, at the gym, or tending to my small army of cats. Writing has always been a part of my life and I'm grateful for the opportunity to get my content out there for people to see.
@spf0227
Previous Skyrim Outmatched by Witcher 3?
Next 10 PS Vita Features the PS3 Lacked