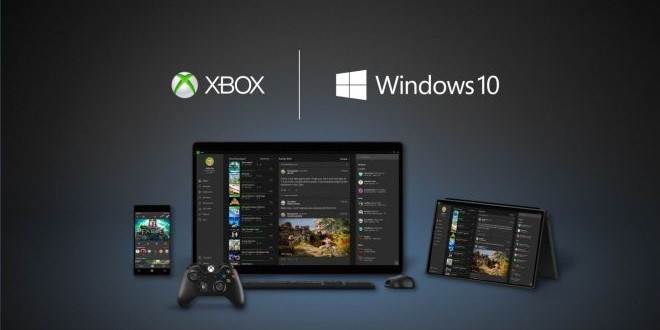 Windows 10 on Xbox One / photocredit Engadget

Windows 10 Coming to Xbox One

In the light of the recent Windows 10 announcement, Microsoft also announced that Windows 10 will be coming to the Xbox One, the new HoloLens, and other mobile devices. What does this mean for the future of Microsoft’s gaming products? Gamers will be able to experience their console games from the comfort of their laptops, but only on a local connection.

The idea of Windows 10 being able to affect a console is little staggering. Devindra Hardawar of Engadget was able to get his hands on this feature, and describes his experience using Sunset Overdrive. He did his streaming over an Intel i5 system. “Having spent dozens of hours with the game on my Xbox One, I didn’t notice much of a difference playing it in its streamed iteration,” Hardawar said.

“All of its acrobatic maneuvers and twitch-heavy gunplay felt as responsive as ever. Best of all, you don’t need any crazy hardware to stream games with Windows 10.”

According to Gamespot, Phil Spencer reassured gamers by saying, “”We won’t see people using Excel on the Xbox, but Microsoft is making it easier to port experiences from PC over to Xbox where they make sense.” This is good. A lot of gamers don’t want their consoles turning into a second computer.

Now, Microsoft is thinking of pursuing something that Sony is doing. It’s called remote play, and it’s what PS4 owners can do with the PS Vita. However, Microsoft doesn’t intend on forcing Xbox owners to buy a separate device.

It’s amazing that players will be able to stream their games from the console to the PC. It almost unites the two platforms. Windows 10 may not be a revolutionary moment in gaming, but it’s certainly changing the way games can be played. Windows 10 gives Xbox users a unique advantage over Playstation owners by giving Xbox owners increased functionality.

When he's not venturing Hyrule, he's probably out on the tennis courts. His Y-axis is always inverted.
@slimjimmy_
Previous Yooka-Laylee Announced By Former Rare Devs
Next Endless Legend – Guardians