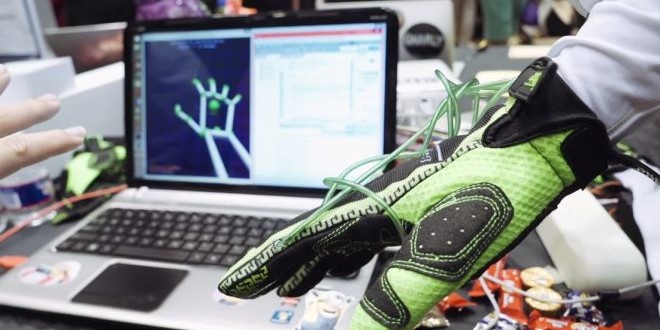 With all of the progress being made with things like the Oculus Rift, Microsoft HoloLens, and Steam’s VR kit it’s no surprise that virtual reality gaming is slowly becoming more of a reality. There is a tremendous amount of effort going into researching ways to place gamers into their gaming environment. All of which focus on vision as a way to change the way the user sees their world. Other devices have been created to attempt to replicate movement in a virtual world; things like the Virtusphere, but I wouldn’t expect to see such a thing in the average consumer household any time soon. Much of the current focus for VR technology is on sight and movement, but a group of engineers from Rice university have set out to create a glove that can actually simulate touch in a virtual reality environment.

Students have created, with sponsorship from a gaming company called Virtuix, a prototype Hands Omni glove. The glove is intended to provide feedback to the user’s hand to replicate the sensation of touch. The glove has inflatable bladders in the finger tips that inflate and deflate as necessary, but that’s about all they could reveal about how it works. Weighing in at only 350g they’re supposedly light enough to not be noticeable. Should the Hands Omni ever reach consumers, virtual reality will take another step to becoming that much more immersive and real.

Admittedly, their creation is a prototype with only the hope of being released to consumers in the future. But, think of the future possibilities for VR. My mind races to Skyrim and all of those miscellaneous items that always seem to find their way into your inventory and then your house. Imagine being able to actually feel any of the books that you pick up and read throughout the world; or receiving physical feedback in your hands as you pull out and wield your sword. Or even, for the rogues out there, being able to feel the bucket you place on a shopkeeper’s head before making off with whatever you can grab from the store. Should something like the Hands Omni glove ever reach the market, a more tactile experience would only improve virtual reality gaming. What are your thoughts on virtual reality?

Hi I'm Daniel and I'm an aspiring writer, avid gamer, and wanna-be cook; I'm not quite certain in which order. I like all things RPG and if that means swords n' spells, all the better. But, provided it has a good story I'll probably want to try it regardless of what it is. I'm a Windows junkie, and I spend my time gaming on Xbox, PC, and my 2DS.
@@danielcooper179
Previous Google Sky wants to bring all the devs to the yard
Next Bloodborne Review – Prepare to die, again.