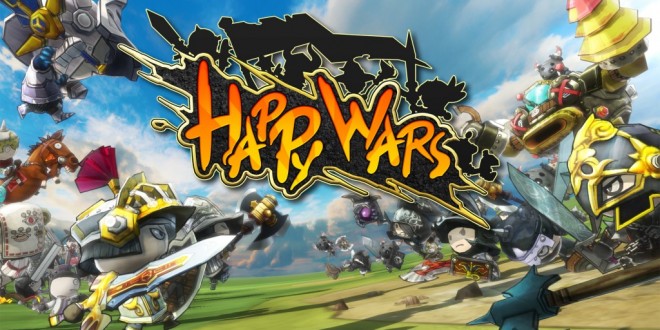 Happy Wars has been available since October 12, 2012 on the Xbox 360, but was recently released for the Xbox One console a few weeks ago. I had never tried the game until I downloaded it earlier this week and at the time I was unaware that it had been released on the 360 years earlier. So I had no former knowledge of what the game was about. Needless to say, my experience is based solely upon the Xbox One game. But I decided to give it a try as it’s one of the few free games currently on the Xbox One, excluding the Games with Gold.  Perhaps because it was free and that I had no knowledge of the game, I had very little expectations for it. After a little trial and error, I have to say that I was pleasantly surprised.

Happy Wars takes place in what would be a cutesy, idyllic world if it weren’t for the two warring Kingdoms – the light kingdom and the dark kingdom. Yes, it’s overly cliché but I don’t think they were trying for anything clever. And the two kingdoms fight over almost every silly little thing possible. The opening intro for the single player campaign sees the two kings bickering over what is the strongest land animal. It’s either a hippo or an elephant and they’re ready to make war to decide which. The Dark King then kidnaps the Light Princess and the game begins.

I strongly recommend playing through the tutorial and then progressing as far as you can through the single player campaign before trying multiplayer. I dived straight into multiplayer, and while my team won my first match, I hardly felt like I contributed in anyway. The tutorial was quite quick, and the single player campaign is quirky and quite appealing; for a multiplayer game, I would recommend at least one play through the campaign just to experience the story. If you’re more into PvP, the first mission was compact enough that I could learn the ropes quickly and move on to multiplayer. This helped so that I didn’t have to work it all out while getting lost in the rather hectic 15 vs. 15 multiplayer brawls. After that first mission, I felt like I knew enough to actually contribute in a multiplayer match.

You can play as one of three classes: a mage, warrior, or cleric. Each have their own unique strengths and weaknesses, but it would have been nice to have a little more variety. However, as you play you receive items that can be equipped to customize your character, helping to alleviate this somewhat. The warrior is your basic tank, smashing things from the frontline. The mage is your stereotypical damage-dealer, shooting spells from a distance with very little survivability in close combat. The cleric is your standard healer, but fights up close with the warrior; however the cleric also functions as a builder. The clerics are the fastest at constructing towers, cannons, siege equipment, and ladders. So the cleric comes in handy in the inevitable siege outside your opponents castle.

Happy Wars is first and foremost a multiplayer game. Most of your time will be spent online because to unlock missions in the campaign you have to gain ranks in multiplayer. Anyone without a gold subscription will unfortunately only have access to the first mission. But it was also online that I encountered a few issues. There were occasions when the game would stutter in larger battles; this wasn’t game breaking, but I noticed it once or twice. Yet, my biggest gripes were with the matchmaking system. The wait times were a little longer than I would have liked. You may not have this issue if you prefer playing coop with a group of friends, but I often found myself looking for something else to do while I waited. After a group of players were gathered, I found characters around rank five or six being paired with characters in the thirties. The gear mentioned earlier gave these characters a bit of an edge, enough so that with enough disparity among rankings one team could gain an edge over the other. This isn’t to say that the gameplay wasn’t fun – it was. For the most part, it was possible and satisfying to take on a player with a much higher rank and still win; but there was still the potential for one team to just dominate.

Happy Wars rewards you with coins every day from playing that can then be spent in an online market. The game may be free, but micro-transactions do make an appearance. Players can spend actual money on happy tickets or use their coins that they earn through playing to gain items. Happy tickets also allow players to pay to become premium members to gain better items and perks. None of which are necessary, and can be avoided completely, but can give you a bit of an edge over others.

Despite a few small issues with the online matchmaking system, I’ve quite enjoyed my time so far with Happy Wars. It provides a similar style of game to that of Plants vs. Zombies, but for free. The story is quite charming and definitely worth the effort to unlock. It provides something to work for, and offers variation on the standard game play. If you haven’t tried Happy Wars yet I would certainly recommend it, and would be surprised if it didn’t find a place on most gamer’s consoles.

Hi I'm Daniel and I'm an aspiring writer, avid gamer, and wanna-be cook; I'm not quite certain in which order. I like all things RPG and if that means swords n' spells, all the better. But, provided it has a good story I'll probably want to try it regardless of what it is. I'm a Windows junkie, and I spend my time gaming on Xbox, PC, and my 2DS.
@@danielcooper179
Previous GoatZ – Goat Simulator’s Newest Expansion Announced
Next Another Google Glass in Development?