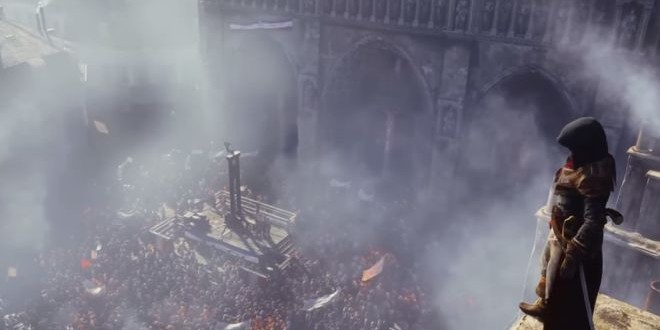 It seems Ubisoft is ready to announce their next yearly installment of the Assassin’s Creed franchise. Ubisoft has released on their twitter page today an image teaser for their newest game in the series. With this teaser they have also announced the date for the World Premiere for their official reveal on May 12th, at 9am PST. So, fans of the series should make sure to mark their calendars. The teaser image on their site is of a brass knuckle with the words “Strength Through Loyalty” engraved into the handle. There is a bird engraved into the wood beside the word “Rooks,” and what looks to be the phrase “God Save the Queen.”

The recent teaser seems to jive with the earlier leak that was reported by Kotaku and later commented upon by Ubisoft to IGN. Obviously, everything at this point is speculation, but this is what has been suggested so far. Supposedly, the new game will take the name Assassin’s Creed: Victory and will take place in 19th Century Victorian London. This seems likely after the reveal of “God Save the Queen,” unless the game is to take part in a British colony. Either way, it seems that there will be some form of British influence in whatever location it is set in. Supposedly the new game will only be available on next-gen consoles and PC, unfortunately moving away from the ps3 and xbox 360. However, gamers on these consoles may still yet have hope until an official statement is actually made. But, if this is true we may see some improvements to the graphics, as the developers can focus solely on the new consoles.

According to Ubisoft’s comment, a game is in development by Ubisoft’s Quebec studio, and it would appear that this is their mysterious game. This will be the first Assassin’s Creed to be delivered from this office. Gamer’s may expect to see subtle differences in the feel of the game after being taken on by a different team of developers, while keeping true to the franchise. This is also supposed to be the only Assassin’s Creed to be released this fall; if this is true, Ubisoft may be listening to its fan feedback and slowing down between launches. But, only to the extent that we may not expect to see multiple games within the year. Fans of the Assassin’s Creed series looking for actual confirmation on any of these details will have to stay tuned for Ubisoft’s official reveal next Tuesday at 9am PST.

Hi I'm Daniel and I'm an aspiring writer, avid gamer, and wanna-be cook; I'm not quite certain in which order. I like all things RPG and if that means swords n' spells, all the better. But, provided it has a good story I'll probably want to try it regardless of what it is. I'm a Windows junkie, and I spend my time gaming on Xbox, PC, and my 2DS.
@@danielcooper179
Previous Heroes of the Storm is getting a new hero, Kael’thas
Next Happy Birthday Minecraft! Free Skins for Xbox Consoles