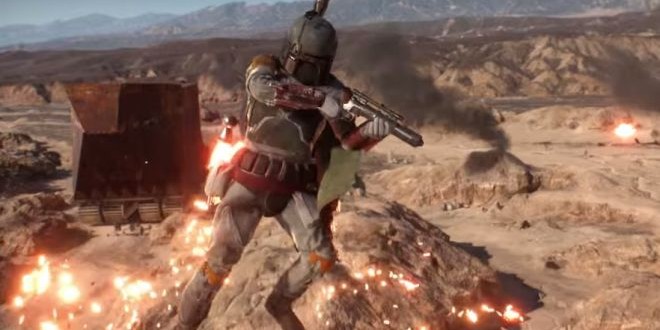 Star Wars Battlefront: What We Know So Far

On April 17th Star Wars Battlefront was officially announced. Since then various new announcements have been made and this is what I was able to find and put together for you:

The game is set to release on PS4, Xbox One, and PC. For graphics junkies, the game is intended to release at 60FPS on both consoles. So, theoretically they should play the same. The game will focus on the original Star Wars trilogy, so no Jar Jar Binks. I’m sure you’re all devastated.

The game will support both 1st and 3rd person view when playing as a soldier. There will be heroes that will vary depending on the game mode. Heroes, so far, include Darth Vader and Boba Fett with more to be announced in the future. There will be some degree of customization to effect your play style. Including the option to unlock, achieve, and collect ‘things,’ that will aid you on the battlefront. There will be various battlefront power-ups, such as the shield displayed in the announcement trailer.

Star Wars Battlefront will include a feature called Missons that will allow you to play solo or cooperatively against bots. In this mode you will be able to play in split-screen. However, it seems that split screen will be limited to only local play. It is unclear how this will affect multiplayer matches when playing with a friend from home.

There are currently four planets to choose from, each hosting a variety of maps of various sizes. The currently announced planets from the Star Wars universe are: Hoth, Endor, Tattooine, and Sullust. According to Niklas Fegraeus, the game’s design director, there will be more than 2 maps per planet at launch. It has since then been cited that there will be 12 multiplayer maps in total and even more if Missions are included. So gamers should be pleased with the amount of content. Those multiplayer maps are designed to hold matches of up to 40 people.

You will be able to pilot various iconic vehicles like the AT-ST, Tie fighter, and X-wings. We are even being given access to the Millennium Falcon. However, it seems that as of now space battles will be out of the picture, players will fly above the battlefield on their respective planet. In addition to these, speederbikes, snowspeeders, and AT-AT’s have also been announced on the official website.

The Battle of Jakku will be releasing as a free DLC on Dec 8th providing two new maps on the planet Jakku; however gamers who preorder will receive the content a full week early on Dec 1st. Star Wars Battlefront is expected to release on November 17 and more news will certainly be released before then. What are you hoping to see included in the new game?

Hi I'm Daniel and I'm an aspiring writer, avid gamer, and wanna-be cook; I'm not quite certain in which order. I like all things RPG and if that means swords n' spells, all the better. But, provided it has a good story I'll probably want to try it regardless of what it is. I'm a Windows junkie, and I spend my time gaming on Xbox, PC, and my 2DS.
@@danielcooper179
Previous Oculus Rift Has Recieved An Approximate Shipping Date
Next Microsoft 10 Emoji Changes – Including the Middle Finger