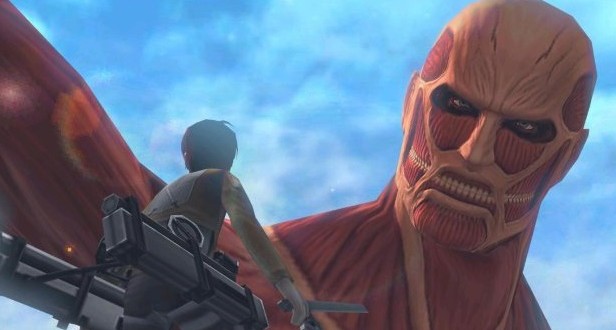 Attack on Titan: Humanity in Chains (developed by Spike Chunsoft and published by ATLUS) is the very first Attack on Titan game to be released outside of Japan. Seeing as the Attack on Titan anime and manga series have become worldwide phenomena over the past few years, it’s safe to say that expectations are high for what will be the first chance that many Attack on Titan fans have to immerse themselves into a fully interactive titan-slaying experience. While Humanity in Chains doesn’t deliver in all the ways that the manga and anime do, it does provide a fast, fun experience that will be particularly well-received by fans of the series.

The game opens with the theme song that precedes each episode of the anime. From the moment you start up Humanity in Chains, it begins to draw you in to the dark, apocalyptic world of Attack on Titan. Enormous human-like creatures called titans managed to wipe out almost all of humanity, and the remainder took shelter in a region protected by three walls: the outermost Wall Maria, the middle Wall Rose, and the interior Wall Sina. After some particularly lethal titans breach Wall Maria, humanity again finds themselves at the mercy of the titans – and it’s up to the military forces to push back the titans and free humanity from their reign of terror.

This is the story that you’ll be experiencing in the game’s Story Mode. Each cutscene is taken straight from the anime, and the rest of the story is told through text-filled slides that precede each mission. In other words, there are no new stories in Humanity in Chains – as the main menu says, the story mode “follows the animated storyline.” If you’ve seen the anime, you know exactly what is going to happen. If you haven’t, the game will certainly spoil a great deal of the story for you. So, unfortunately, there really isn’t much of an enthralling story in the game – it’s focused much more on the gameplay experience than Attack on Titan lore.

The menu also lets players know that “missions can be played through multiple character perspectives,” which means that you’ll get the chance to play through certain parts of the story as Eren Jaeger, Mikasa Ackermann, Armin Arlelt, Levi, and Sasha Braus. Though there are five different playable characters, their missions often overlap. For example, all characters except for Sasha share the missions “Forest of Giant Trees” and “Defend to the Death.” That means that, to complete all of the story missions, you’ll have to play these two stages four times each. The objectives are the same – the only difference is the character that you’re controlling, which doesn’t make as much of a difference as it could have made with a bit more customization. Sasha is the only character that has a unique set of missions – the others may have one or two exclusive missions, but the majority of your time spent in story mode will involve replaying specific scenarios multiple times. One particular exception is Eren’s ability to transform into a titan, but this is rarely used. When the ability is available, the game becomes entirely too easy, as Titan Eren is a virtually unstoppable killing machine. For example, I was able to finish one of Titan Eren’s missions in under a minute.

When you’re not wrecking havoc as Titan Eren, you’ll be zipping around environments using Omni-Directional Mobility (ODM) Gear and using a variety of weapons and items to bring down titans. ODM allows players to shoot ropes from their belt that attach to virtually any surface and allow them to fly through the air at high speeds. Using ODM is definitively the most fun part of Humanity in Chains. Flying around stages feels incredible, and it feels even better when you pull off a really cool move, like vaulting over a building to incapacitate a titan, and then dealing damage to two more titans before you hit the ground. Unfortunately, ODM doesn’t really work well all of the time. This is mainly because of the invisible walls that surround each stage. A minimap on the touch screen outlines the playable area in red, but when you’re in the heat of battle, it’s easy to forget where the boundaries are. There’s nothing worse than barely escaping with your life from an encounter with a titan only to find that your escape route is blocked off because you’ve hit the edge of the stage. The free feeling that using ODM gear provides would have been much more thrilling if the stages had been just a bit larger. This is especially noticeable in the stages that take place in city areas. When missions take place in large forests or fields beyond the walls, the limitations are much less annoying – though they are still very present. It’s also easy to get stuck near the edges of the map, which can make for some particularly embarrassing deaths. 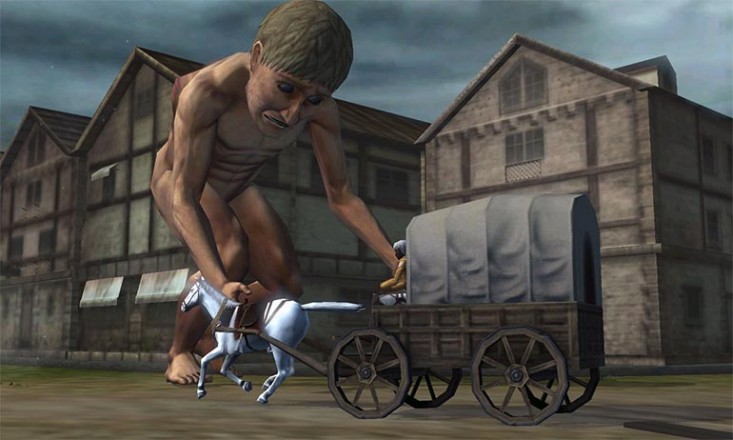 Being eaten by a titan is not a pleasant experience, and it’s even worse when the death sequence takes so long that you could easily put your 3DS down, fire off a few text messages, and then pick your system back up before the scenario is over. When you’re picked up by a titan, you’re given a prompt to shake the control stick to escape, though how this works isn’t exactly clear. The text below the prompt simply says “Help!” Sometimes, one of my squad members will heroically slash the titan’s arm off, leaving me to escape to a nearby rooftop to refill on my ODM’s gas, resharpen my blades, and heal. However, there are other times when your character will miraculously be able to break free of the titan’s grip. And, finally, there are situations where you’ll spend upwards of twenty seconds violently shaking your control stick only to be presented with the painfully long death sequence mentioned above. This is particularly frustrating when you’re attempting a solo mission and there are no squad members to help you out.

The story mode isn’t all bad, though. There are still hours of fun to be had while attempting to free humanity from the tyrannical titans. Objectives can range from killing a certain number of titans to protecting certain areas to finding potatoes scattered about the map (yes, that’s one of Sasha’s missions). The frequent change-up of objectives is refreshing, especially since environments, cutscenes, and general mission scenarios are often recycled. There are a few horse-riding missions that look and play particularly well, and there are many items that can be found if you stop focusing on slaughtering titans and take a bit more time to explore. This isn’t always possible with mission time limits, but it’s definitely worth checking everything out before rushing straight to the goal.

Though not an essential 3DS title, Humanity in Chains is a unique experience that will please both fans of the series and action-adventure aficionados despite its flaws.

I'm Aria! When I'm not doing other things, I'm either playing video games or writing about them. If you like games, anime, and random stuff, you can follow me on Twitter @Sage0fForest
@@Sage0fForest
Previous Steam Greenlight Spotlight: Shape of the World
Next Splatoon Gets Another Global Testfire 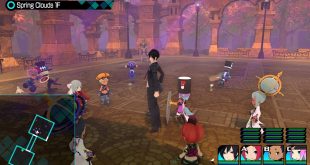 Taking risks and living with the consequences. That’s what the Banner Saga feels like, most ...