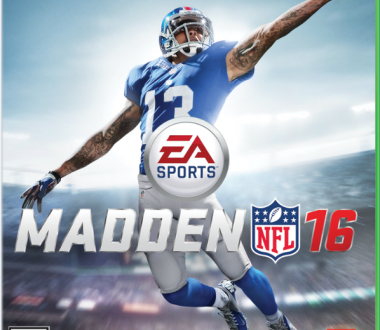 Each year a new Madden NFL game is released and each year a new athlete is selected to don the front cover of the case. This year a vote was held to decide amongst fans who would hold the honour of becoming the cover athlete. The vote was held for two weeks at ESPN.com, Madden Ultimate Team, and Madden NFL Mobile. The final round of voting was between Odell Beckham Jr. and Rob Gronkowski. The final tally for the results were announced today on Xbox Wire. Odell Beckham Jr. will be Madden NFL 16’s cover athlete making him the youngest player to ever be depicted on the front cover of a Madden NFL game. The rookie soared onto people’s radars after making a spectacular one handed catch that later became Play of the Year. Beckham Jr. makes his debut onto the game’s cover in what looks to celebrate this through a recreation of his feat. Randy Chase, Senior Director of Marketing for EA Sports, states on Madden NFL’s news page that “Odell Beckham JR. is a true playmaker and a perfect fit for this year’s game.”

Madden NFL 16 will provide brand new QB mechanics allowing you to “be the playmaker.” All of which are meant to give the player greater depth of control to create their own “WOW” moments. A Playmaker Broadcast has also been introduced to get you as close to the game as possible for all of those spotlight moments. You will be able to play in Connected Franchise and Ultimate Team Mode. Collective Franchise allows you to build up a team from scratch as a General Manager working your team from the bottom to the top. Ultimate Team mode allows you to build your perfect team from current players and take that team online to dominate against other players.

Madden NFL 16 is currently available for pre-order and will be released on August 25, this year.

Hi I'm Daniel and I'm an aspiring writer, avid gamer, and wanna-be cook; I'm not quite certain in which order. I like all things RPG and if that means swords n' spells, all the better. But, provided it has a good story I'll probably want to try it regardless of what it is. I'm a Windows junkie, and I spend my time gaming on Xbox, PC, and my 2DS.
@@danielcooper179
Previous Beginning of the End for Last-Gen Consoles?
Next World of Warcraft Bans: 100,000 Accounts Shut Down