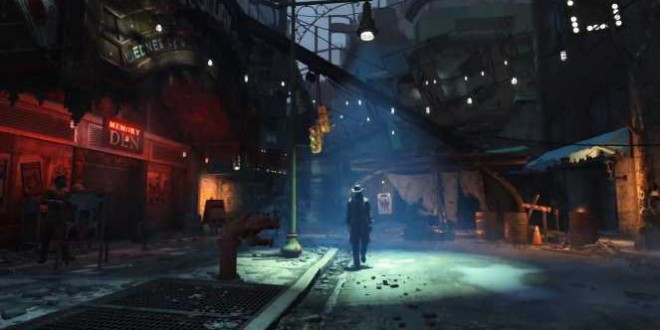 Bethesda caught the gaming world by storm the other day when it teased a Fallout announcement on its Twitter. Linking a website that only had a 24 hour countdown along with the classic branding of the Fallout franchise, Bethesda promised us something good to look forward to – and they didn’t disappoint. When the countdown reached zero, it was replaced by the trailer to Fallout 4, which looked absolutely stunning.

Although the wasteland never looked so good, it’s still the same old wasteland. Mutants, power armor, vault suits, all of the Fallout series trademarks are here. Series staples aside, whether or not there’s something more that Bethesda wants to show us that sets this Fallout game apart from its predecessors is yet to be seen. Fallout 3 had lots of greys in its pallet, creating a depressing world full of ruins – Fallout: New Vegas had us in a new frontier, having us feel more hopeful, and creating a desperado-esque feeling. We didn’t get much story out of this trailer (Apart from the fact that there’s a dog, which rules.), nor did we get a point in the Fallout timeline to look towards. Its lore is entirely unbeknownst to us at the moment.

Fallout 4 will be getting the info bomb treatment at June 14th, at 7PM PST during Bethesda’s E3 showcase, and you can expect to have all of our questions answered there. Until then, you can stop by the website at fallout4.com to gaze upon the glory of classic Fallout branding back in the limelight again. It’s fantastic to see Fallout back in the relevance of the public eye again, and anyone privy to the industry will be getting beyond excited by this announcement.

That all being said, there’s something… Heavyhanded, about this whole thing. Don’t get me wrong – it’s beyond exciting to have this trailer out, beginning the hype train for all those invested in the Fallout series (Which is to say almost everybody). The problem is that around this wonderful trailer (the only thing we all care about) is at least half of the webpage dedicated to begging us to pre-order. It’s fine that Bethesda wants us to pre-order their game – I might even do it, now that Steam offers refunds. But it’s near despicable to me that they would spoil the announcement of such a huge game asking us to pre-order what hasn’t even been shown to us yet. I can’t help but think it would be better to have only shown us the trailer on fallout.bethesda.com, and not launched fallout4.com until after their showcase on June 14’th.

Either way, qualms aside, this is an immensely important release for all those invested in the gaming community, and we ought to put away our reservations on this one – for now – and just get get excited. We’ve been awaiting a Fallout 4 announcement for years now, so we shouldn’t let bad marketing spoil our fun. Whatever you do, just don’t pre-order it yet. We’ll be abe to truly throw a celebration on June 14th.

I'm a college student studying journalism, and when I'm not studying, I'm writing here at LTG. I love indies and AAA's alike - I'm just a lover of this medium in general.
@MiCottuli
Previous Lenovo K3 Note a cheap phablet with flagship specs
Next Neverwinter on Xbox One – Rise of Tiamat Arrives This Month