Breaking News
Home » ARTICLES » Microsoft Edge – what is it? 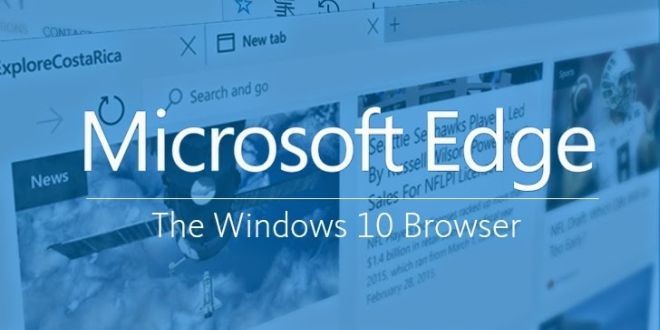 Microsoft Edge – what is it?

Microsoft Edge isn’t exactly a name that will trigger a sense of familiarity. Sadly, the aforementioned software has somewhat fallen by the wayside in all of the hype surrounding the upcoming release of Windows 10, the new OS from Microsoft. What exactly is it then? The simple answer is a new web browser that will come supplied with Windows 10, replacing the oft-mocked Internet Explorer. The complicated answer is essentially a long list of tiny improvements and enhancements that Microsoft are cramming in to make sure that Edge isn’t just the back-up browser for when Chrome crashes.

At the forefront of Microsoft Edge is a solid and well-planned integration with all things Windows 10. This goes from the small things, such as allowing users to annotate (see; draw on) web pages, to integrating Cortana (Microsoft’s answer to Siri) for use with the browser. Such additions will no doubt seem a bit superfluous to the vast majority of us that haven’t used Edge yet, but just like switching between tiles on the Xbox One, they will probably turn into useful little additions within days of using Edge.

Take the ability to annotate web pages – such an ability may seem completely pointless, I mean, when has anyone ever looked at a web page and fancied a doodle? Yet just think about every time you’ve ever had to research a topic online; instead of haphazardly copying-and-pasting content, you can now quickly highlight part of a page and save it for later. In particular, annotations will be much more suiting of touch-screen interfaces. You won’t even have to be online to take advantage of your annotations, as web pages can be saved for offline viewing using OneDrive.

Taking a note from the books of Firefox and Chrome, Microsoft Edge will also adopt the use of extensions. There’s a strong argument to be made that the use of extensions is why Chrome, and to a lesser extent Firefox, pushed Internet Explorer aside so easily. Again, the change is small on the surface, but in day-to-day use it becomes so useful.

The big change that you wouldn’t know about unless some nerd like me came along to tell you is that Microsoft has gone under the hood of Edge to completely streamline it in comparison with Explorer. No less than 220000 lines of code and 300 interfaces have been removed from what was once the coding for Explorer. That means far less that can go wrong, stemming from the basic principle that there’s less code to conflict with extensions and other programs used by Windows 10.

There’s so much more that can be said about Microsoft Edge, but that article would end up being far too long for anyone to find enjoyable. The techies at Microsoft have been hard at work, and now you hopefully won’t be too confused when you can’t find Internet Explorer on your new Windows phone, tablet, computer, or console. Not that you ever used it.