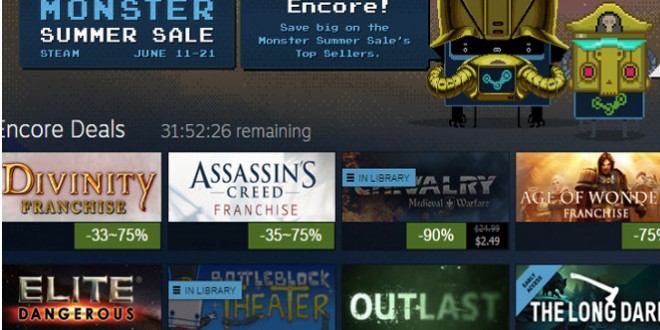 The Steam summer sale is coming to a close this dear, taking with it the majority of the PC community’s hard-earned cash. With fantastic games going on sale for dirt cheap every 12 hours, it’s almost impossible to keep up with every diamond in the rough, or even some of the more hyped games coming on sale. Thankfully, in the last 48 hours of the sale, Steam is putting up the “Encore,” in which 99 of the sale’s most popular deals come back to haunt us. To save you all the time of checking reviews for each game, we’re putting together a top 10 to help advise you on the best titles that the encore has to offer.

Now, as much as I’d like to, there’s no way I could play all of these wonderful games. As such, not only will this list be based on personal opinion, but some great titles may not make the cut because I haven’t gotten around to playing them. If you have other suggestions, chime in over in the comment section!

South Park: The Stick of Truth was an entry into a long series of awful South Park titles. With it being the first adaptation to actively involve Trey Parker and Matt Stone however, the masses on Steam got quite a treat when it came out. South Park: The Stick of Truth plays like a paper mario game, with RPG mechanics that stay engaging with timed button-presses. Solid mechanics along with the fact that it packs in a season’s worth of actual South Park footage makes it a must-buy for fans of the show.

This is a must-buy for just about anybody at a whopping 90% discount. For the cost of a boxed salad, you can pick yourself up a solid medieval combat game. Featuring a fun amount of gore with engaging and satisfying melee combat, this is a game that I would justify purchasing at full price, being one of Steam’s most satisfying experiences for those wanting to scratch a medieval itch. Buy this.

Being an easy game of the year candidate, and one of the most surprising sleeper hits of 2014, the Steam  summer sale brings you a fantastic deal on Shadow of Mordor. Not only does this game have a fantastic combat system, which would be fun on its own, the game really shines with its “Nemesis” mechanic. This mechanic makes every grunt capable of becoming a boss with his own personality, and without delving into all of its complications here, I can say it’s one of the most impressive experiences I’ve had in a game in some time.

Do you like Zelda? Do you like nightmares? Binding of Isaac is for you. A game about a naked child killing demons with his tears, BoI is a ridiculous and fun game. The Rebirth version hands the player a host of new features and improvements to the game, this homage to Zelda dungeon-crawling is a great pick for anyone.

I’ve spent more time in this game than I’d care to admit over the years, and I don’t regret a second of it. Made by strategy genre legends Firaxis, XCOM: Enemy Unknown gives you an easily customizable game full of deep combat an a pretty decent narrative. You can also pick up the shooter XCOM: Declassified in a bundle with this if you’re willing to spend another dollar, and I think that’s worth it as well. Steam’s throwing you a bone on this one.

These games require no introduction. I won’t pick just one, because I think they’re both equally good, and cheap enough to justify picking up both for the price of a sandwich. If you haven’t played these games yet, you probably haven’t played games for a very long time – and if you have, then I envy you for the treat you’re in for. Buy these games. Buy the game of the year editions. No question they’ll be adding countless hours to your Steam playtime tally.

The whole Batman: Arkham franchise is on sale, and they’re all great, but I would suggest this one more than the others. Batman: Arkham City makes a heartbreaking narrative, builds upon a revolutionary combat system, and throws it into a content-packed city that’s incredibly fun to explore. This is an insane price for an insane game, and one of Steam’s best offerings.

Darkest Dungeon is one of Steam’s most punishing games, and won’t be for the faint of heart, but if you love a challenge in a strategy RPG, Darkest Dungeon is for you. All of your characters have stress meters that act almost like second health bars, influencing their actions and making or breaking an expedition. This is a must-have for players who like a challenge.

This game is barely on sale, and you shouldn’t care. The Witcher 3 continues CDPR’s trend of creating unconditionally beautiful, high quality games. A game that can last well over 200 hours, The Witcher 3 drags you into the fantastic lore of the Polish book series, and never lets go. This is a game that needs to be experienced. Let it grace your Steam library.

Some may not agree with this taking number 1 over The Witcher 3, but I feel pretty strongly about this one. Transistor was life-changing for me, and for many other gamers. Arguably the best indie game ever made, Transistor weaves a heartbreaking, mysterious story with solid philosophical arguments into a game with incredibly unique and engaging mechanics. For a game that lasts only about 5 hours, I’ve dumped well over 30 into it, never wanting to let go. Transistor is a masterpiece in the truest sense of the word, and everyone needs to at least give it a loo.

You’ve got another day to pick these games up during the Steam summer sale encore, and I suggest you give these a thought. These are all insane prices, and you’d be seriously missing out without them hanging proudly in your Steam library.

I'm a college student studying journalism, and when I'm not studying, I'm writing here at LTG. I love indies and AAA's alike - I'm just a lover of this medium in general.
@MiCottuli
Previous Plants Vs. Zombies: Garden Warfare 2 revealed at E3
Next How the Xbox Game Preview Program Works