In a coming patch Heroes of the Storm will see a few changes to the store that may provide you with possible price drops and even the possibility of some gold back. The upcoming patch will be making changes to how the bundle packs work. What the developers previously referred to as static bundles are going to become dynamic. If you’ve bought a bundle in the past, or have your eye on one but you can’t rationalize buying one of the heroes a second time, you’ll want to hear this.

The coming changes mean that the prices of the bundles will fluctuate depending on what heroes you currently own. If you own one or two of the heroes in a particular bundle, or maybe one of the skins, the price of the bundle will be reduced accordingly. And, even better, if you’ve purchased a bundle with a hero that you already own, just to get that awesome looking exclusive skin or mount, then you should have a refund coming your way with the next patch. Blizzard will be refunding people for characters that they’ve bought twice with in-game gold.

This change won’t affect bundles with only 2 items, nor will it affect bonus items thrown into the bundle. So, there’s no way of re-buying the same bundle to gain bonus stimpacks.

There will also be changes to the current bundles in the store. The Nexus bundle will be getting tweaked and renamed the storm bundle, offering some of the newer heroes that have come along since launch. The Nexus bundle will then drop off of the store a week after the patch is released, just in case people still want the exclusive mount that it offers. Along with the Storm bundle, two new bundles will be added: the Conquest bundle and the Domination bundle. These will be character only bundles, with five heroes each.

These changes don’t yet have a release date; the Heroes of the Storm blog says that the changes will arrive with the next major patch that’s just around the corner. So keep an eye out, you may have a refund and some juicy discounts coming your way.

Hi I'm Daniel and I'm an aspiring writer, avid gamer, and wanna-be cook; I'm not quite certain in which order. I like all things RPG and if that means swords n' spells, all the better. But, provided it has a good story I'll probably want to try it regardless of what it is. I'm a Windows junkie, and I spend my time gaming on Xbox, PC, and my 2DS.
@@danielcooper179
Previous Windows 10 Email Scam
Next Assassin’s Creed Syndicate at RTX 2015 with new, exclusive gameplay demo 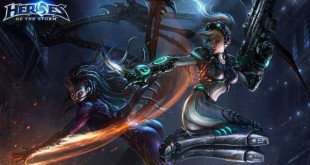 Heroes of the Storm Review

On paper, I shouldn’t really be enamored by Heroes of the Storm, Blizzard’s first foray ...