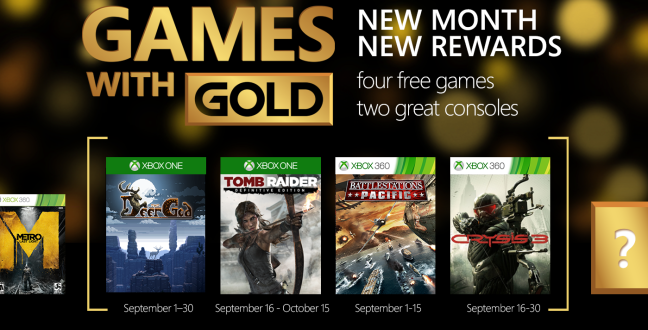 For the month of September, Xbox Live Gold members can get four games, all for free. It is important to note that if you are playing predominantly on the Xbox One and no longer have an Xbox 360, you can go on Xbox.com and link the free games to your account in preparation of the upcoming backwards compatibility update.

The Deer God is the first of the games offered for free, available for the whole month of September. It is a side scrolling platformer with pixelated graphics where you play as a deer (as the name implies).

From September 16th to October 15th, Tomb Raider: Definitive Edition can be yours for free (likely in anticipation of the upcoming Rise of the Tomb Raider). It is an HD remake of the original Tomb Raider with all the DLCs included, which was released for last gen consoles, which in turn is a reboot of the franchise.

From the 1st of September to the 15th, you can get your hands on Battlestations Pacific, one of the relatively few RTS games that are on consoles. The game is based on the actions of the US and Japanese navies in the Pacific theater of World War II, and as such you can order around ships of all kinds. Unlike most other RTS games, Battlestations Pacific does let you take direct control of your units, letting you fly around in a plane for example.

The second half of the month of September will let you pick up Crysis 3, the last game of the Crysis series, known for it’s on the fly weapon customization and nano suit that lets you have many abilities such as cloaking and super strength. As the cover art implies, it came out when bows were all the rage in video games, and as such you can use a bow with various arrow types in the game.

Tags 360 Games with Gold one Xbox

@https://twitter.com/thefallenlords
Previous Destiny: The Taken King- News from the Twitch stream of Year two and how it affects you
Next Lazer Team gets a release date

Though originally planned for release in 2016, Mass Effect: Andromeda was delayed until publisher EA’s ...