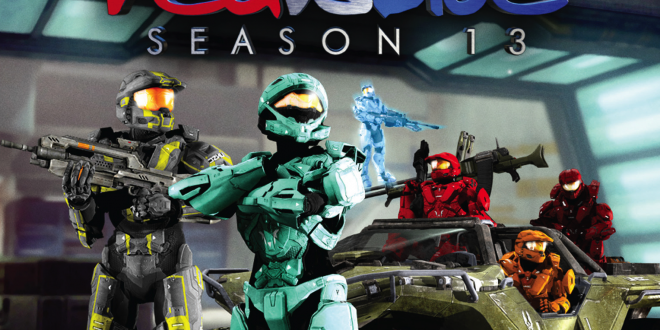 Red vs Blue: Season 13 review: Preach to the choir

With the ending of the 13th season of Red vs Blue comes the ending of the Chorus trilogy, the first saga in the Red vs Blue series that explores what happens when the Red and Blue teams wind up on a planet that happens to put a lot of faith in the competence of the two teams. As such, the season starts off by showing the aftermath of the actions of all the major characters in the trilogy in typical story telling fashion: the bad guys get badder, and the good guys rearm, regroup, rebuild, and settle their differences, completely oblivious of the coming storm.

This is where the season truly shines, by showing how all these personalities (some of whom opposed each other for years) interact with each other and either work together for a common goal or fall apart. As a result, long time viewers of the Red vs Blue series may notice that this is one of the more serious seasons. While Caboose still has his moments on camera, significant amounts of screen time is dedicated to the newer characters who invariably are more concerned about the future of Chorus.

(Spoilers ahead. Obviously. Skip to the end for a shortened review.)

(Seriously, I’m going to allude to what happens to certain characters and the ending, don’t say I didn’t warn you.)

However, this shift in tone does make the story somewhat predictable, more so than previous seasons anyways. After all, how often do you find a character who berates another for cowardice, which prompts the latter to sacrifice their life in a heroic fashion, which then causes the former to make a rallying speech. Similarly, the ending to the season involves all the main characters making a heroic last stand after finally setting aside their differences as Reds, Blues, AI constructs, Freelancers, and colonists, only to cut to black, leaving their fates unknown. And by the way, did I mention one of them sacrificed themselves (after an emotional final message of course) so that everyone else can have a fighting chance?

That being said, the Space Pirates and Locus and Felix are wonderfully well portrayed, and while you may not want to root for them, they are definitely continuing the tradition of having interesting villains in Red vs Blue. Sure, they are a group of ruthless mercenaries, but as the season goes on you come to realize who really is the most ruthless of the bunch and who is simply good at fighting.

Fans of the Halo universe may also be delighted at the further integration of the universe into the Red vs Blue series, without it feeling too forced or shoehorned in. Granted, its not as overt as the fight between the Freelancers and the Insurrectionists in Season 10, but it is a nice touch.

This season of Red vs Blue also continues in the relatively new tradition of having animation supplement the in-game machinima, and as expected, it is excellent. Over the top fight sequences, large battles, and significant but short actions that are otherwise impossible to do in the Halo games have all seamlessly made its way into the storytelling, to good results.

Final verdict: Longtime fans of the Red vs Blue series will find something for everyone, whether you like the animation, story telling, or humor. Newcomers might be a bit lost at the beginning, but for the most part it should be fairly easy to keep track of what is going on.

If you would like to read what Miles Luna, the writer for RvB, had to say about the narrative choices made in season 13, click here.