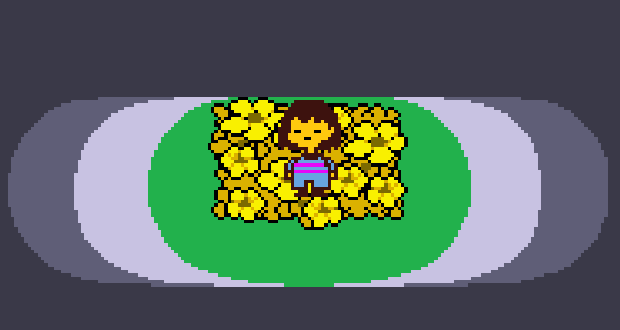 Undertale is the latest addition to a long list of games that I show to anyone who claims that video games aren’t works of art. It’s one of the most incredible games I have ever played. During the seven hours that it took to complete my first playthrough, it never lost my attention. When I was playing Undertale, I was fully engrossed in it, and when I wasn’t playing it, I was thinking about it. In fact, I’m still thinking about it. As I play through the game another time, Undertale stays with me every time I leave it. If you have a computer and enjoy video games at all, you have to play this game. There’s nothing else like it. 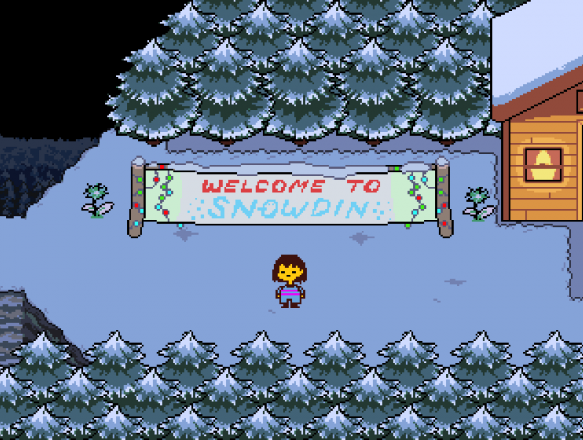 The first things you’ll notice about Undertale are the art style and the music. The visuals are clearly inspired by Earthbound, but they’re unique enough to stand on their own. When you look closely, you’ll find unique details that make it obvious that this game was a labor of love. Whether it’s a purposefully misspelled sign or a doodle inside of a letter, there’s always something on screen that expresses the game’s personality. The art perfectly matches the tone and style of the game. The same can be said for the music in Undertale, which is incredibly impressive. Each track perfectly compliments the event or environment that it accompanies. The music also stands on its own as a gorgeous collection of songs. I never once felt like a song or sound effect was out of place. These aren’t the most complex visuals or the most intense songs that can be found in RPGs, but when the entire experience of Undertale is taken into consideration, the sound and visual elements are just excellent. 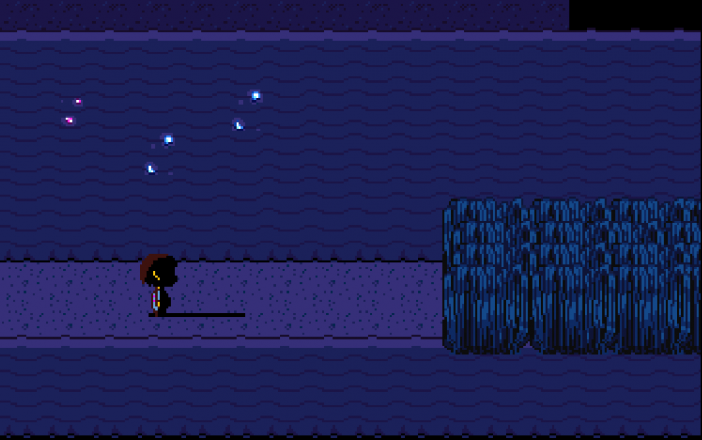 My favorite part of Undertale is probably the story – it’s what makes the game truly unique and special. There are multiple endings to the game, and it’s incredibly easy to spoil, so I won’t go too far into it. All you need to know is that you control a human who has fallen into the Underground and embarks on a journey to get back to the surface. It’s a simple premise that we’ve seen plenty of times before, but Undertale uses incredible characters to make it feel new and exciting. Every monster you meet – even the ones that you’ll come across in random encounter battles – has a personality. One monster is so depressed that it attacks with tears, there’s a monster that’s too afraid to fight back, and there’s even a monster that hilariously hurls fire at you because it thinks it’s being a helpful temperature control device. Every line of dialogue and every attack serves to tell you more about the many characters that populate the Underworld. As you play the game and discover more about the Underworld, you start to understand just how deep the lore is. When you see the ending for the first time, you’ve just barely scratched the surface of the Undertale story. Even though it’s a short game, Undertale tells a story that will delight you, sadden you, make you uncomfortable, and challenge the way you think. We’re going to be talking about this story for a long time, and rightfully so. 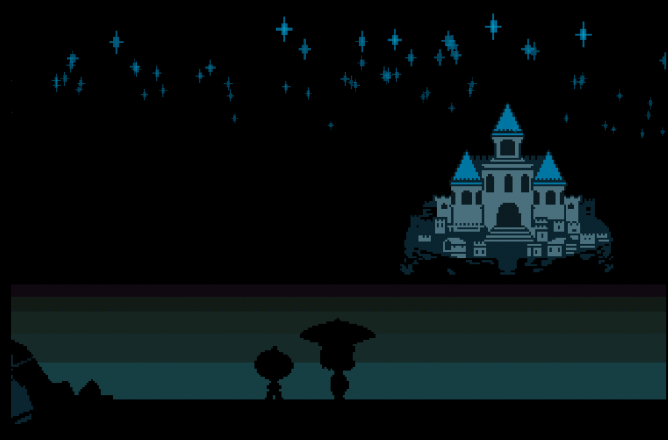 Undertale focuses heavily on player choice – every decision matters, and Undertale never forgets. You can shut the game down at any time, but the game remembers the things you’ve done – even those decisions that were made since the last time you saved the game. This mechanic gradually causes you to change the way you think about the characters in the game. They’re not just pixels with malleable memories that can be easily altered. They’re real personalities that are affected by the things you do, even if you’re not performing an action that directly involves them. This might sound brutal and scary, but don’t worry – it never does anything but make the experience better, even if you decide to start over and play through the game in a completely different way. The game balances freedom, responsibility, and consequence very well, and it’s just as exciting as the player choice mechanics we see in AAA RPGs. You don’t just play Undertale – you experience it. 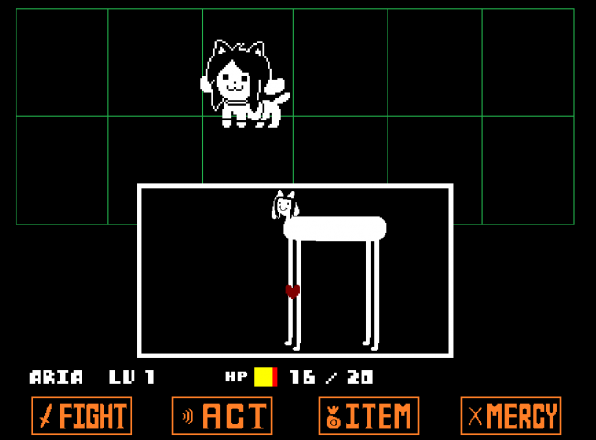 The battle system plays less like a JRPG and more like a classic bullet-hell arcade game. The main part of the battle takes place in a white box towards the bottom of the screen. You are represented by a small heart, and your goal is to avoid getting hit by the attacks of whatever monster you might be encountering. Above, you’ll see one of these widely varied attacks. Though the basic gameplay elements remain the same throughout most of the game (don’t get hit), the way that each attack looks and functions is surprisingly unique. Monsters all have different attack patterns, and those attack styles are always in accordance with their personalities. If you choose to attack, you’ll be met with a horizontal meter that’s color coded. The closer the white bar is to the center of the meter when you stop it (by hitting “Z”), the more damage you’ll do. Of course, you don’t have to fight. You also have the “ACT” option, which includes commands that range from “hug” to “whisper” to “mystify.” Every single battle is able to be won through non-violent means. You’ll have to get good at dodging attacks and experimenting with ACT commands, but it’s very possible (that’s how I played the game during my first playthrough). On the other hand, you can choose to perfect your attacks, level up, and eliminate the enemies that stand between you and the surface. Talking with enemies and choosing ACT commands is reminiscent of the Shin Megami Tensei series, but with a few adjustments. The battle system is not incredibly complex, but it is very fun and satisfying. 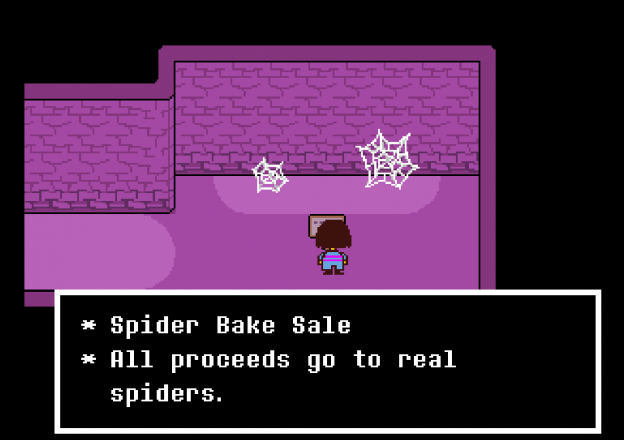 It’s hard to do Undertale justice through a review. There’s really only one way to understand just how awesome this game is – you have to play it. There’s not a single thing that I think could have been done better or should have been done differently in Undertale – I enjoyed every second of my time with it, and I’m still playing. This isn’t the deepest RPG of the year. It isn’t the most visually stunning RPG of the year. It might not even be the best RPG of the year. It is, however, a game that nails every single thing it tries, and manages to create an experience that’s fun, exciting, and meaningful. In my opinion, that makes it an absolute must-play.

Undertale is one of the greatest RPGs I've ever played. A beautiful story, a unique battle system, a quirky sense of humor, and huge choices to make all come together to create a game that is an absolute must-play and an instant classic.

I'm Aria! When I'm not doing other things, I'm either playing video games or writing about them. If you like games, anime, and random stuff, you can follow me on Twitter @Sage0fForest
@@Sage0fForest
Previous RWBY: Volume 3 gets a premiere date
Next Star Wars Battlefront: First impressions from the beta