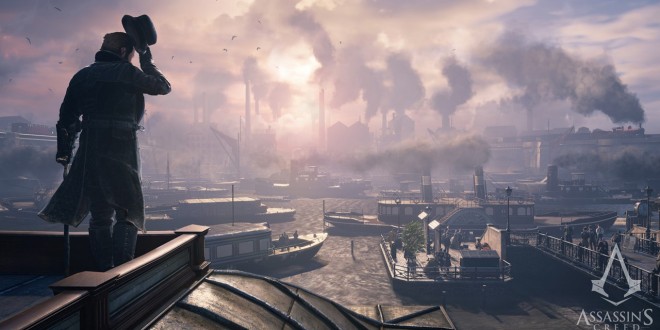 After standing in line for the midnight release of Unity last year and getting home to a broken game that I couldn’t even bring myself to finish (despite the enormous amount of potential that the setting provided), I was afraid for Syndicate (though, at the time, we all thought we’d be playing a game called Assassin’s Creed Victory).

Would Syndicate make the same mistakes that Unity did? Would this be more like Black Flag, or would it be more like Unity? Thankfully, you don’t have to worry – Assassin’s Creed Syndicate stumbles, just as other AC games have done before, but it ultimately succeeds in being a smooth, fun, and satisfying experience. Following Evie and Jacob Frye in their quest to bring freedom to London is a path you’ll definitely want to travel.

The first thing you’ll see in Syndicate is the wonderfully rendered version of London in 1868 (near the end of the Industrial Revolution). It’s breathtaking. Dark clouds of smoke float across the sky, and the streets brim with activity. Horse-drawn carriages, torn and tattered child workers, and heavily armed gangs are all commonplace in the world of Syndicate, and you immediately feel immersed in the environment. It’s been a long time since I actually stopped moving to eavesdrop on a conversation in an Assassin’s Creed game, but I found myself doing it quite often in Syndicate – the world just feels genuine.

Each part of London looks great – from the dark waters and damaged work boats of the river Thames to the elegance of Buckingham Palace, you’ll find yourself wanting to explore everything. I ended up synchronizing with every viewpoint on the map before I even started the fourth sequence – I was just that invested in seeing all of the sights that Syndicate has to offer. Yes, there are framerate stutters, but nowhere near as many as we saw in Unity. Some sections of the areas (particularly the warehouses and the darker, smokier areas) start to look the same after a while, but overall the game is gorgeous and it’s easily one of the best looking games on current-gen consoles. 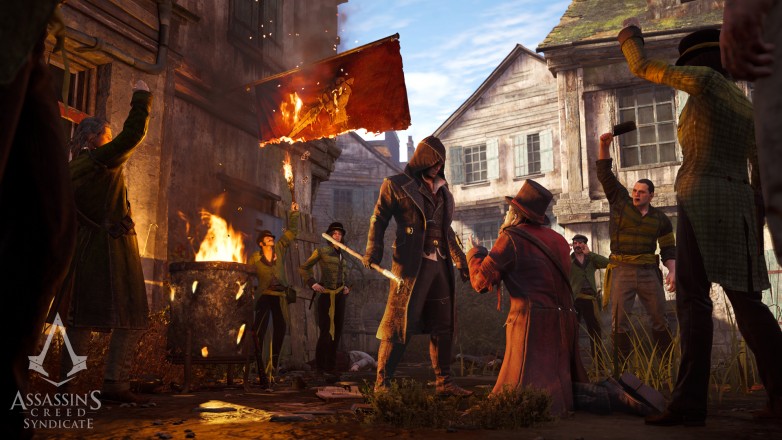 Something that really surprised me about Syndicate was how much I liked the sound. The voice acting for the main characters is fantastic – Evie and Jacob have rich personality in their voices, and the voice actors do their best even when faced with uncreative dialogue. The music is great, too. I felt like an orchestra was accompanying me on my journey through London, with full string sections setting the tone for my brutal assassinations. Combat noises have been improved as well – you can hear every breaking bone, every swinging sword, and the loud bang of every gunshot. The audio in Syndicate just oozes quality, and it really adds to the immersion that is so important to the game. 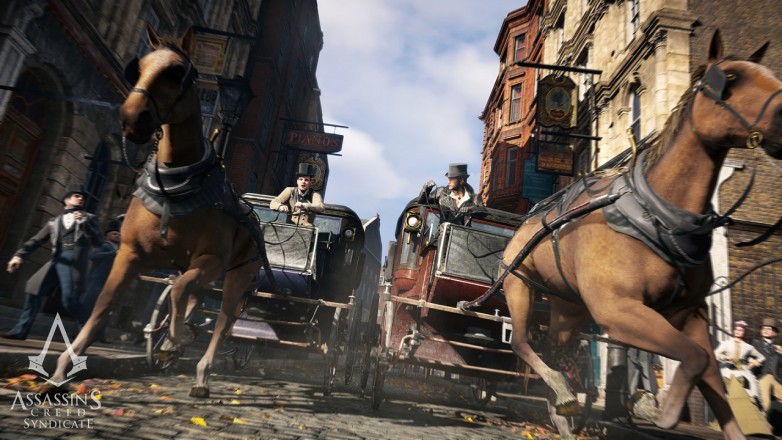 The story of Syndicate follows twin siblings Evie and Jacob Frye, two assassins who find themselves trying to rid London of the Templar influence that corrupts it. You don’t have to have played previous AC games to understand Syndicate, but it does make it a lot better. There are a lot of references to previous titles, including a particularly fun sequence in which you get to explore the mansion home of Edward Kenway, the protagonist of Assassin’s Creed IV: Black Flag. The game also suffers from something that I found annoying in Assassin’s Creed III – a incapability of deciding whether or not the present-day story-line or the historical story-line is more important.

Syndicate definitely spends more time in the historical setting than in the present-day, and that allows for a deeper experience in London. However, I wish it was a more balanced experience, because, as things stand, it seems like AC might as well just do away with the present-day story arcs altogether. Hardcore AC fans will love the present-day story, but newcomers will probably be more confused than entertained. Evie Frye is more concerned with the more long-running theme of Assassins vs. Templars (something that continues in the present-day story), and her missions often involve seeking out Assassin artifacts and information. Jacob, on the other hand, is more focused on killing Templars.

When Evie is thinking about where important artifacts could be hidden, Jacob is simply focused on finding and taking out the next target. These two perspectives work quite nicely, allowing the player to jump between exploration and puzzle-based gameplay (Evie) and combat-central gameplay (Jacob). This is strictly in terms of their character-exclusive missions, though. When it comes to gameplay, both characters feel very similar. When it comes to who you’ll be playing as most, it really amounts to personal preference. Throughout Syndicate, you’ll learn more about the characters and experience a relatively solid story that’s interesting enough to accompany and support the classic AC gameplay. 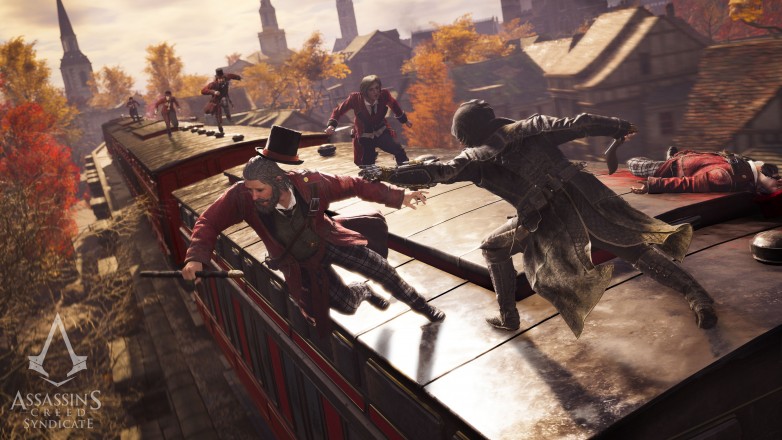 Finally, we’ll talk about the most important part – the gameplay. Like I mentioned earlier, Syndicate focuses on refining the parts of AC that are already well liked. Multiplayer has been scrapped altogether, and this is a good thing. Without the multiplayer complications that plagued Unity, it was a smart move to return to a single-player, stealth-based experience. Free-running is fun, as always, but it’s also not perfect. It seems that, with every AC game, free-running gets more accurate. However, it never gets so accurate that you don’t find yourself jumping onto (or off of) buildings, vehicles, and obstacles that you had no intention of interacting with. It can be frustrating, but it works more often than it doesn’t.

The vehicle systems are solid, and the stealth gameplay here is the best it’s ever been. Syndicate is at its best when you’re sneaking through an environment filled with enemies, quietly advancing towards your objective and pulling off glorious assassinations and non-lethal takedowns. If you’ve ever played an AC game before and enjoyed the gameplay, you’ll feel right at home with Syndicate. If you’re new to the series, it might take some getting used to, but you’ll quickly grow to love the variety of options that the system gives you. Even though some new elements feel strange (like the Batman-esque rope launcher), everything fits together and Syndicate is fun to play. 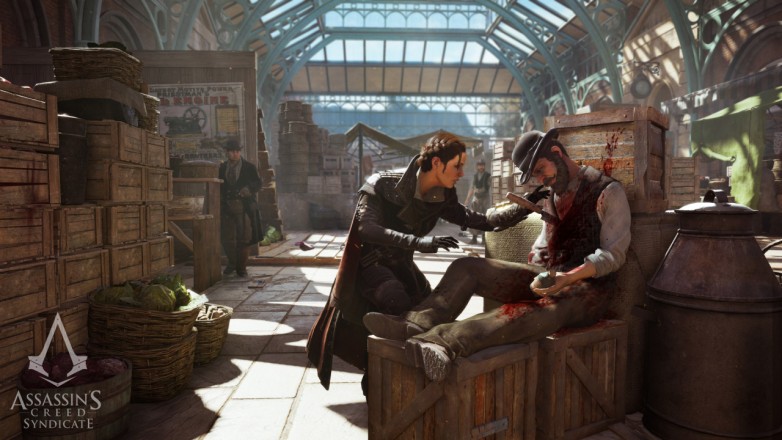 One of my fondest memories of Syndicate is of playing as Evie, perched on the edge of a building overlooking a group of Templar gang members. Below me is a suspended platform covered in barrels. Below that is one Templar. I jump down to the ground, silently assassinate the Templar, and quickly use a smoke grenade to cover my tracks. As the smoke spreads, I use the rope launcher to return to my perch on the side of the building. When the smoke clears, five Templars are investigating the body. I lean down and use my blade to drop the barrels, killing all five of the gang members. Triumphantly, I dropped to the ground and continued on to my destination. These are the kind of moments that Syndicate is all about – in fact, these are the moments that Assassin’s Creed is all about. If that sounds like fun to you, then you need to get your hands on a copy of Syndicate as soon as possible. Syndicate is not perfect, but it’s a great game – the best AC game since Black Flag. It’s worth your time, and I highly recommend it.

After standing in line for the midnight release of Unity last year and getting home to a broken game that I couldn't even bring myself to finish (despite the enormous amount of potential that the setting provided), I was afraid for Syndicate (though, at the time, we all thought we'd be playing a game&hellip;
Assassin’s Creed Syndicate Review – Back In Sync
Assassin’s Creed Syndicate Review – Back In Sync
Aria Maryn

Assassin's Creed Syndicate expands on what's great about the series, making it the most focused and satisfying AC game since Black Flag.

I'm Aria! When I'm not doing other things, I'm either playing video games or writing about them. If you like games, anime, and random stuff, you can follow me on Twitter @Sage0fForest
@@Sage0fForest
Previous Top Twelve Games for Halloween
Next What is happening in Halo 5’s story? The good, the bad, and the odd