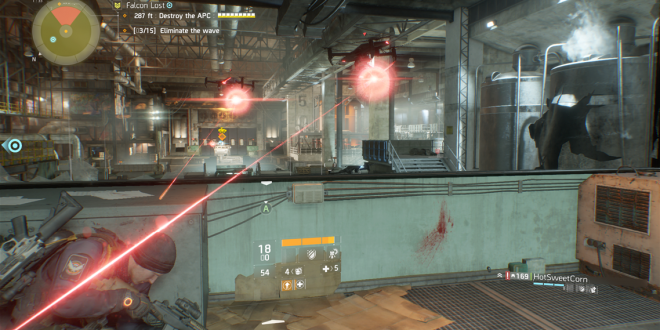 Is The Division’s Incursion poorly made?

Before The Division was released, it was speculated that even though there would not be any traditional raids, additional endgame content in the form of Incursions would function as the rough equivalent to raids. As it turns out, that speculation is more or less correct, as the release of The Division’s first Incursion has proven.

However, it appears as though going with a traditional raid might have been more beneficial, at least from an audience satisfaction standpoint.

Taking everything that you hate in The Division, and concentrating it into one room!

On paper, the Incursion has an interesting premise that fits in well with The Division’s established gameplay without breaking away from traditional boss fight mechanics. The Last Man Battalion has seized a water facility, and they’ve brought in an APC (think of a giant armored car with a rapid fire grenade launcher) and drones to defend it. Needless to say, the prospect of fighting a ground based vehicle opens up a lot of theoretical ways to defeat it without simply shooting it for eons.

Unfortunately, the APC is completely immobile, invulnerable, and its only offensive capability is an area of effect attack that can instantly kill you before you can roll out of the way. Plus it can shoot through cover, regardless of how logical that may or may not be. While that in itself may not be a dealbreaker, the entire Incursion is just one giant room where you have to fight off 15 waves of enemies, and occasionally, you have to kill a special enemy with a bomb and plant said bomb on the APC to damage it. Oh, and there are no checkpoints, not because the Incursion itself is difficult per se, but because the waves of enemies spawn with no break in between them.

Think of it as something similar to Gears of War’s Horde mode, but you can’t use half of the room that you are fighting in thanks to some turrets, and most of your enemies ignore cover and just run at you with shotguns. At first, it seems almost satirical, combining the worst aspects of The Division (endless rain of grenades and shotgunners who ignore cover) into one giant room.

Boring, frustrating, a missed opportunity, or all of the above?

Even if you ignore the idea that The Division’s first Incursion seems to be receiving the same criticism that Destiny’s Prison of Elders did (no checkpoints, monotonous wave after wave of enemies, lack of new gameplay mechanics other than “shoot these guys and occasionally run here”), it just simply isn’t a good encounter within the context of The Division’s gameplay mechanics. The most ideal way to beat it is to either hide in a giant trench in the middle of the room where the APC can’t shoot you, or in any other area of the room where you can funnel the shotgunners into a chokepoint and the APC can’t shoot you, and just kill everything.

There’s no need to suppress enemies, half the abilities are useless due to the nature of the fight, and once again, you really only have to spec your character for maximum firearms damage and health since there’s nothing that really requires a high electronics build (no, you cannot hack the enemy drone to fight for you). You don’t even have to take cover, and if anything, it can get you killed.

All in all, it seems as though Massive and Ubisoft made a spectacularly poor first impression with the Incursion, and it is definitely not an encounter that would encourage you to buy future DLC packs if this is what they have in mind for endgame content.

It is especially disappointing considering how the last mission of a game does feature a fight against a helicopter that actually utilizes similar attacks, but it is a far more dynamic fight because it isn’t forcing you to simply sit in a room and shoot mindless shotgunners all day. Instead, it encourages you to move around the map to damage the helicopter by hacking some turrets; not the best or most innovative boss fight ever, but it works and it’s much more enjoyable.