Breaking News
Home » ARTICLES » DOOM Review – To Hell and Back 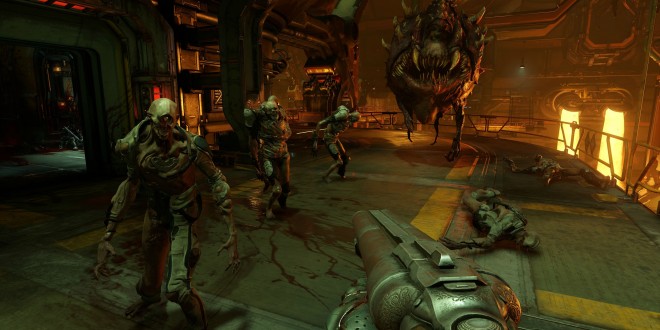 DOOM Review – To Hell and Back

As a series, DOOM has had quite the history. In 1993, the original DOOM was released, and it instantly became a hit. Since then, the series has only grown in popularity. DOOM, DOOM 2, and DOOM 3 rank among my favorite games – and I’m far from the only one. The first two games are pure FPS bliss, while DOOM 3 took things in a different direction that was a lot of fun to play. After a long wait, the brutal and bloody series is back with a new game, simply titled DOOM (though there are those that insist on calling it DOOM 4).

DOOM is amazing. That’s really the best way to kick this review off. There wasn’t a moment during my time with the game where I was bored or wishing that I was playing another game (and I spent well over 30 hours with the game). Whether you’re a solo gamer, a PvP master, or a creative map maker, DOOM has something for you.

Let’s start with the star of the show – the campaign. As always, you’ll play as the unnamed Doom Marine, tasked by the Union Aerospace Corporation with… well, killing a ton of demons. A researcher at a UAC station went overboard with harnessing energy from Hell, and ended up releasing countless hordes of demons into our world. It’s up to you to kill them, destroy the device that’s connecting the station to Hell, and close the Hell portal.

This game actually has more of a story than previous DOOM games. The main antagonist, Olivia Pierce, is wonderfully acted, while Samuel Hayden manages to actually be an interesting character instead of the lore-spitting machine he could have been. While in Hell, you’ll find ancient tales of the “Doom Slayer,” who was sealed away by demons after his murderous rampage through Hell. This brings new depth to the Doom Marine, who has previously just been a pair of hands wielding big guns. 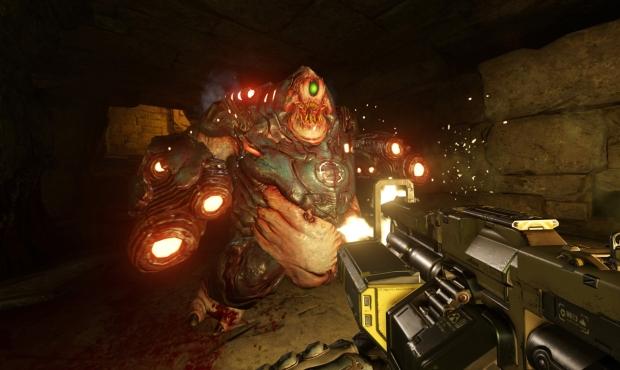 There are 13 missions to fight your way through, and each of them has secrets. For example, a classic map from either DOOM or DOOM 2 is hidden in each level, along with Doom Marine minifigures, suit upgrades, and pieces of lore. This is, of course, in addition to the hundreds of demons that you’ll be slaying during each level. The formula is pretty consistent – you go to an area, get locked in, and have to kill all the demons in the area before you can either progress or backtrack.

Though it sounds (and is) repetitive, the variety of combat always keeps it from feeling repetitive or boring. There are a ton of different ways to kill your enemies. You’ve got a full wheel of weapons that you can switch between at any time – you can go from a pistol to a rocket launcher to the super shotgun to the BFG all in just a few moments, and it gives you the chance to really think about the best way to take down certain demons. You’ve also got glory kills, which are melee takedowns that are deliciously gory. After an enemy takes enough damage, they’ll start blinking. If you hit the melee button, you’ll blast towards them and end their life in a way that’s sure to make squeamish players cringe. For example, one glory kill has you tear the horn off of a demon and use it to slit the demon’s throat (brutal, right?). I won’t spoil the other ones, but know that they get much more brutal than that.

The best part about the story is the way that you get progressively stronger. By collecting more weapons and gaining upgrades, you become a true force of nature. At the start, the rocket propelling Revenant is a serious threat. By the end, though, Revenants are complete pushovers. Don’t get too comfortable, though – as soon as one type of demon starts seeming weak, DOOM throws another one at you that’ll be sure to bring about bloody game over cutscenes. The stronger you get, the more enemies the game will throw at you. Even at your strongest, you’ll constantly be outgunned and outnumbered, but it’s never unfair – there’s always a way to win, and you can always do it with stunning style.

The story takes around 12 hours to beat, and it’s a perfect length. After playing through once, you’ll definitely want to go back and play again, as there are probably a lot of secrets and rune trials (mini stages that make you stronger) that you missed. The campaign is probably the strongest part of DOOM, but it’s not the only thing here – you’ve also got multiplayer and SnapMap. 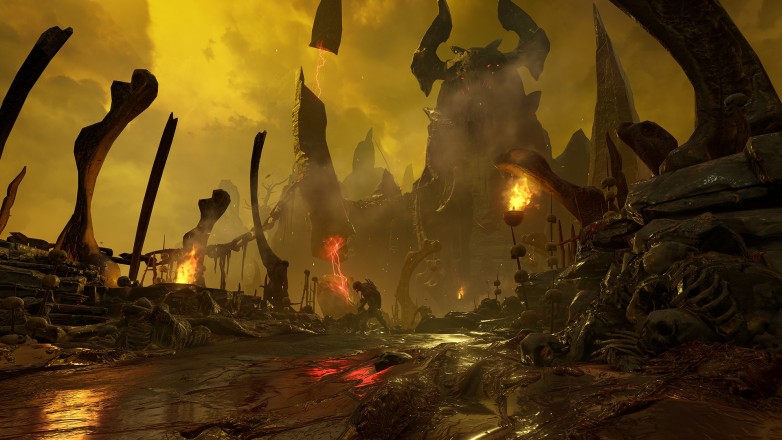 Multiplayer in DOOM is not arena PvP, and that’s really important. If you go in expecting something like Quake, you’ll be massively disappointed. There are loadouts, far fewer weapons to pick up, and game modes that you’ve probably played in the Halo and Call of Duty series. Classic deathmatch is an obvious favorite, and the game makes an interesting change to area control by making the point constantly in motion. There’s also a mode that requires you to harvest the souls of your enemies after you kill them, which is basically just Call of Duty’s kill confirmed mode in a different skin. In each match, demon runes periodically spawn, allowing one player to transform into a powerful demon while the rest of the players remain marines that are weak in comparison.

This all sounds negative, but don’t get me wrong – the multiplayer is really fun. The best thing about it is how fast it is. Though it’s not an arena multiplayer experience, movement and speed are still crucial. If you stay still, you’ll die – it’s as simple as that. After playing DOOM‘s multiplayer, playing Black Ops III and Halo 5 made me feel like my character was walking through quicksand. In DOOM, you’re constantly sprinting, and you’ll find yourself speeding through tight corridors and jumping over lakes of fire to reach your enemies and objectives.

Multiplayer is an addicting part of DOOM, and the package wouldn’t be complete without it. Old-school DOOM fans are slamming the game for departing from the classic arena multiplayer that id is known for, but most people will have a lot of fun with it – I know I have. 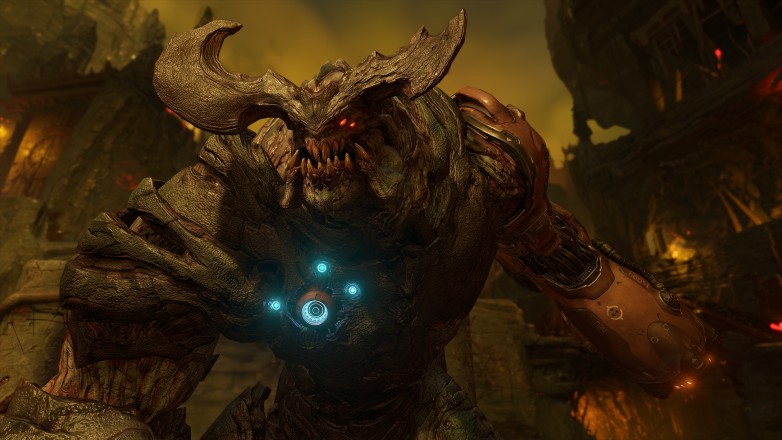 The final mode in DOOM is something that’s entirely new to the series. It’s called SnapMap, and its closest equivalent is Halo’s forge. SnapMap lets you create your own multiplayer and solo maps to play through and share with your friends. Making multiplayer maps is a lot of fun, as you can cater them to the type of match you want to play.

My favorite, though, is making single player maps. It’s fun to have a tool that lets you create dark, survival-horror corridors as well as wide-open arenas for wild demon ambushes. You have access to a wide variety of materials and environmental tools, and they’re all very easy to use. Even if you don’t feel like taking the time to create, you can check out the maps that other players have made. In the short time since release, there are already a ton of great maps that you can check out in SnapMap mode.

It stands in the large shadow of DOOM‘s other two modes, but SnapMap is still a fantastic addition that helps to bring DOOM into the current generation. 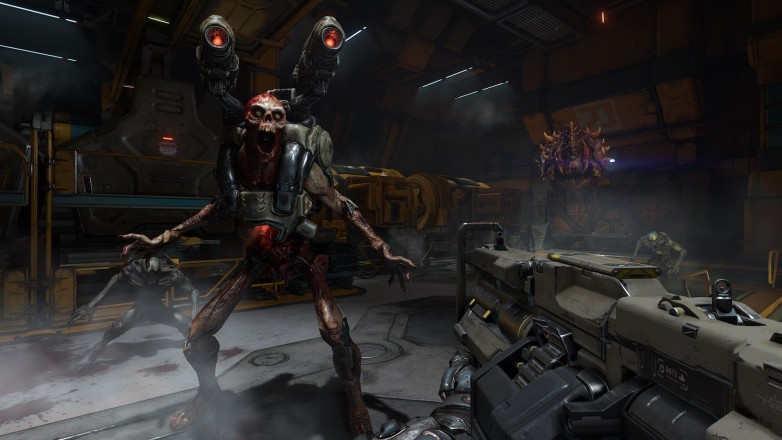 DOOM‘s soundtrack is basically a really harsh heavy metal album. Crushing guitar riffs and cymbal crashes are frequent, and bass lines are fast and relentless. It’s interesting because it sounds more like music that was recorded in a small studio by a metal band and not by some sort of professional orchestra. Of course, the music was all carefully planned, but it’s a cool feeling to hear music that fits with the gameplay in such an organic way. Things are quiet when you’re walking through an empty corridor, but when demons show up, the metal starts up and things go to hell in the best possible way.

As for visuals, DOOM looks great on Xbox One, PlayStation 4, and PC. Not surprisingly, PC and PS4 probably have a graphical edge over the Xbox One, but it’s hardly noticeable for the player that’s not actively looking for it. Ripping apart demons has never looked so satisfyingly disgusting. The UAC station and the depths of hell all look fantastic, and the detailed environments beg to be explored while still gently guiding you towards your objective. This is one of the best looking shooters of the year. 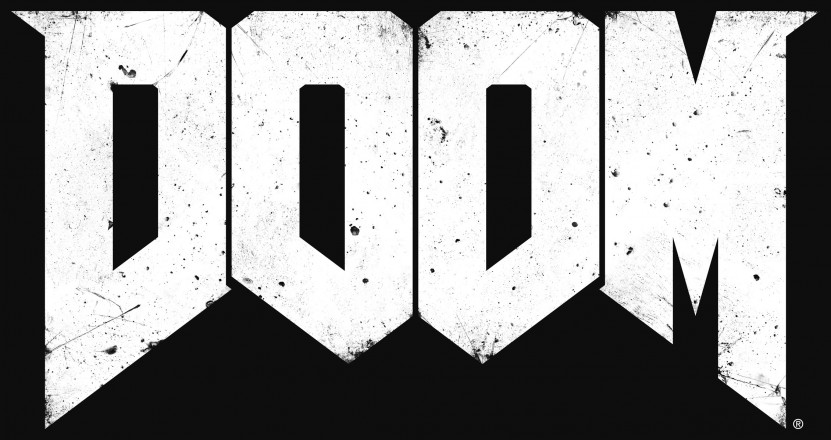 DOOM manages to strike a perfect balance of pleasing hardcore fans of the old games and welcoming new fans to the series. It easily has the best single-player campaign of any FPS released this year, and its multiplayer and SnapMap modes provide a great amount of replay value.

There are people I wouldn’t recommend the game to, just because of it’s nature – this game is gory, intense, loud, and absolutely insane. If you’re not into that, then stay away. But for those people who find that description appealing – welcome to Hell. You’ll be staying here for a while.

As a series, DOOM has had quite the history. In 1993, the original DOOM was released, and it instantly became a hit. Since then, the series has only grown in popularity. DOOM, DOOM 2, and DOOM 3 rank among my favorite games - and I'm far from the only one. The first two games are pure FPS&hellip;
DOOM Review – To Hell and Back
DOOM Review – To Hell and Back
Aria Maryn

DOOM's return is a glorious feat that must be seen to be believed. Fun, frantic gameplay, great replay value, and a solid multiplayer system makes this a comeback that is not to be missed.

I'm Aria! When I'm not doing other things, I'm either playing video games or writing about them. If you like games, anime, and random stuff, you can follow me on Twitter @Sage0fForest
@@Sage0fForest
Previous Lichdom: Battlemage Review
Next Overwatch hero counters guide: Tips and tricks to (theoretically) counter every offensive hero

We’ve heard speculation about a potential Fallout TV series being in the works for quite ...